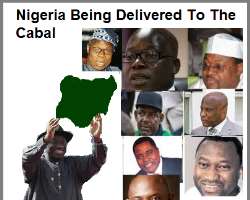 Nigeria's Cabal have come together to fight the overwhelming popular and prosperity choices of the frustrated, suffering masses as the battle lines for the 2015 electoral contest are drawn, with the ruling PDP party sticking by embattled and corruption defined President Goodluck Jonathan and his vice, Boko Haram links Security Department, SSS investigated Namadi Sambo; and the opposition party, the APC selecting two candidates known for their integrity; former military President, Muhammadu Buhari and former Attorney General of Lagos State, Pastor and Professor Yemi Osinbajo.

The Cabal in a hasty dinner with Mr. Joseph Makanju of Dangote Company as chief fund raiser, and controversial Jerry Gana as chair, raised a whopping sum of over N 21 Billion towards buying a victory for the incumbent, President Jonathan.

For a nation of about 40 million voters, the staggering sum easily gathered at the President's behest and only a fraction of the larger sum promised and much more to be secretly poured in, is expected to be tossed at all processes of purchasing a victory including rigging machines already in motion.

21 Billion to put it in context can buy 10 Indomie noodle packets per voter; or 20 loaves of bread per person. That is a massive amount of “stomach infrastructure” which the Cabal believes will deliver it a victory over Nigeria's poor masses and protect the Cabal hold on the reins and gains of Nigeria's golden-egg-laying-hen coveted financial system.

The Buhari/Osinbajo combination by all polls including those conducted by the ruling party have proven to be the choice of the overwhelming majority of suffering Nigerians, with all polls giving Buhari and Osinbajo over double digit and up to 90% preferability leads.

The Jonathan PDP ruling party government oversaw a double digit expansion of poverty in Nigeria with latest data according to the Nigerian Bureau of Statistics at over 112 million Nigerians poor with a whopping over 100 million destitute, living under a-dollar-a-day. Nigeria despite its economic massive wealth has 10% of the world's poor and is one of three nations with the most poor in the world.

From the feel in the media and on the streets, most Nigerians are fed up with the lack of tangible development; a handful of over-due projects being touted as “transformation” all financed on crippling loans from the Colonialist and far East, while the nation enjoyed a usurped surplus in oil trade revenue at a very high price for the past 16 years of straight PDP rule.

Cabalization: The populace is also frustrated with the advantage given to the Cabal who have been becoming stupendously wealthy, world leading billionaires all owning an array of private jets while the masses can barely eat or travel with unregulated privatizations –of NEPA/PHCN, Cars and Car import, Roads, Cement, Airports, even water — delivering money of the poor to the Cabal for poor or unavailable service at quadruple the global average price for the same utility.

Unhinged terror and impunity for corruption and terror sponsorship also has the masses beat as well as the record of the Jonathan administration aggressively sponsoring and promoting tribal and religious divides and sentiments which the poor masses have surprisingly been able to walk over recently as evident in forum conversations.

Simply put- Nigeria is tired of this government and the Cabal who are afraid of a credible, no nonsense and zero tolerance for corruption government inclusive of and by the real people acceding power are jittery and desperate to pay as much as it takes to protect the status quo that delivers Nigeria's oil wealth straight into their pockets before, during and after the oil is sold. A recent US report by the GFI, Global Financial Integrity research and advisory group, gave the figures looted from the nation in 2012 alone as $8 billion dollars.

Cabal Not Going Down Without a Fight
Cash buys votes and in Nigeria this is most aggravated because money in the system is also used to bribe and purchase the media, electoral officials, commandeer and control police and the SSS to intimidate and obstruct the opposition. Even as has already been observed across the country, the power and money leadership is already utilizing the so-called Independent Electoral Commission, INEC to ensure scant availability of PVC cards in opposition States and regions.

The nation's security service has also been pulled from protecting the people from terror, a task one can hardly say it did, to raiding opposition offices and seizing voters data for use in denying access to voting tools in opposition epicenters and preparing safe rigging lists that will not include opposition candidates, as opposition alleges.

Other tools like rigged machines and “disappearing ink” are also reliably expected to be deployed. Nigeria's President has made several emergency visits to Israel where the company which has been reported to have been involved in electronic rigging in African nations like Zimbabwe is reportedly being engaged towards ensuring a successful manipulation of Nigeria's valentine's day election process.