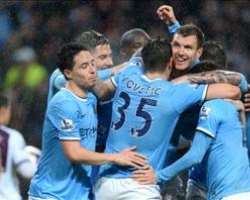 David Silva struck twice as Manchester City made light of their absence of strikers to brush troubled Crystal Palace aside 3-0 at the Etihad Stadium on Saturday.

Yaya Toure also got on the scoresheet as the champions moved level on points with Chelsea at the top of the Barclays Premier League.

It was in-form City's eighth successive win in all competitions – one short of equalling a club record – and they trail Chelsea only on goal difference ahead of the leaders' clash with Stoke tomorrow.

The hosts led against the run of play through Christian Benteke's fine, curling finish in the 18th minute, but a Radamel Falcao header drew things level in the 53rd before Villa's Gabriel Agbonlahor was controversially sent off following a challenge on Ashley Young.

West Ham remain fourth and are just a point behind United after beating rock-bottom Leicester 2-0 at Upton Park.

Andy Carroll pounced on a Paul Konchesky error to put the home side in front in the first half and the seal was put on the Foxes' 10th defeat in a 12-game winless sequence when Stewart Downing fired in after the interval.

Southampton emphatically brought an end to their run of five straight losses in all competitions by seeing off Everton 3-0 at St Mary's.

A Romelu Lukaku own goal and efforts from Graziano Pelle – his 11th club goal of the season – and Maya Yoshida sealed the points for the fifth-placed Saints, who are two points behind West Ham.

Tottenham are up to sixth, with goals from Harry Kane – now with 14 goals for Spurs this term – and Erik Lamela either side of Ashley Barnes' reply guiding them to a 2-1 home win over Burnley.

At the other end of the table, QPR moved out of the relegation zone as Charlie Austin's hat-trick saw them complete a remarkable comeback from 2-0 down to defeat West Brom 3-2 at Loftus Road.

Albion raced into a two-goal lead through early efforts from Joleon Lescott and Silvestre Varela, but Austin swiftly hit back with a penalty before adding a leveller and then 86th-minute winner.

It takes his goal tally for the season to 11, while his team have moved up from 18th to 15th, two points clear of the drop zone.

Burnley have replaced QPR in the bottom three, slipping to 18th place, while Hull stay 19th after they lost 1-0 at home against Swansea.

Ki Sung-yeung's early strike proved the difference as the Tigers' run without a win extended to 10 games.