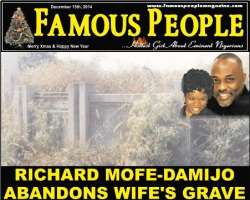 Richard Mofe-Damijo, Delta State Commissioner for Culture and Tourism has abandoned the grave of his wife, Mee Mofe Damijo at Ikoyi Cemetery, Lagos and the grave is now overgrown with weeds.

The late wife was the publisher of Classique Magazine, Editor of Quality Magazine and host of Mee & You Television Talk Show before she died after fibroid operation in Lagos.

When Famous People Magazine visited Ikoyi Cemetery days ago, Moors there told us that they have never seen the husband come to visit the grave since she was buried in the early 1990s.

They said initially members of her NGO, Sunshine Foundation do visit and gives them money to clear weeds around the grave. But they have stopped coming. The Moors added that those who really care about their late love ones do visit regularly and keep their love ones grave clean.

They added some even come with their families to spend time at the graveside of their love ones. It is interesting to know that it was Mee who brought Richard Mofe-Damijo to fame and fortune when she married him and moved him from Oshodi where he was squatting with some friends to her duplex at Talabi Street, Adeniyi Jones, Ikeja, Lagos. Onome, her only daughter and child lives in America.
Culled from Famous People Magazine