Obasanjo has no respect for law - Kashamu 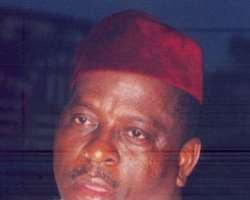 A chieftain of the Peoples Democratic Party (PDP), Prince Buruji Kashamu, has described former President Olusegun Obasanjo as one who does not have respect for the laws. In a statement issued yesterday, Kashamu said Obasanjo's 'disobedience' of the court's order not to launch his (Obasanjo's) controversial autobiography, 'My Watch', was an indication that he did not have respect for the rule of law.

Kashamu, who is having a running battle with the former president, got a court injunction, restraining him (Obasanjo) from launching his autobiography in which the former was severely criticized by the latter. Following the launch of My Watch, the court had ordered that the book be confisticated and further publication be stopped.

The statement reads in part: 'While I would not discuss the subject matter, which is already before the court, it is interesting to read Chief Obasanjo recanting after the court ordered him to show why he should not be punished for contempt of the court within 21 days. Perhaps, he had realised the implications of his actions and the far-reaching effects of the renewed court order. Among others, he said, contrary to the impression created by the media, he could not 'dare or confront the judge or the judiciary'.  He went on to say he was a law-abiding citizen who will not 'dare' a judge or knowingly flout an order of a court of competent jurisdiction.

'But the truth is: his denial flies in the face of obvious facts. Chief Obasanjo dedicated a good portion of the public presentation to upbraiding the judge and asked that the upright judicial officer be sanctioned for doing his job. Now, if he did not know about the existence of the order, why did he take time out to publicly deride the order and the judge?

'Again, Chief Obasanjo's conduct in and out of office does not support his claim of being a law-abiding citizen. It is on record that while in office as a democratically-elected president, he disobeyed court judgments, even those of the Supreme Court, with reckless abandon. Apart from his disregard for many of the apex court's decisions in respect of his deputy, Alhaji Atiku Abubakar, he stubbornly withheld the allocations due to local governments in Lagos State until he left office in spite of a Supreme Court judgment to release the funds. Then, there was his interpretation of the apex court's verdict on onshore/offshore dichotomy suit, among others.

'Put succinctly, Chief Olusegun Obasanjo's launch of his discredited book in spite of the court order confirmed his knack for lawlessness and arbitrariness. Everybody knows that good governance is based on the Rule of Law, due process and respect for constituted authority. It beats my imagination that this man can be sermonising about good governance when he shamelessly advertises all the elements of bad governance. He is bad governance personified. Chief Obasanjo is the worst advertisement for the product he is trying to sell - good governance. He has shown that he does not have respect for the judiciary, and that impunity is his second nature.

'By his unruly conduct, Chief Obasanjo has shown for the umpteenth time that he is indecent and uncivilised. Certainly, President Goodluck Jonathan and his predecessor, the late President Umaru Musa Yar'Adua and others he criticised in the controversial book are made of a sterner stuff than him. They are true democrats and gentlemen to the core. If they were in his shoes, I wager that they would not have acted in total disregard of the valid and subsisting orders of the court,' Kashamu said.