Checkout Toyin Aimakhu as she Gets Her Backside Shaped 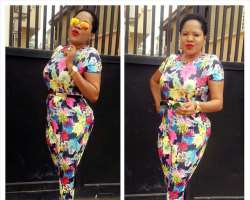 These days, most women are trying to look slim and fit and also trying to burn calories through the use of some newly designed materials that helps hold firm the particular part of the body that needed to be worked on.

One of the ladies to join the body shaping lineage is Nollywood actress, Toyin Aimakhu Johnson. The actress posted a picture of herself with a well shaped body with an increased backside. She stated that the backside is real because she has been able to train her waist.

Toyin who happens to be the Vice President of the Actors Guild of Nigeria (AGN), while eulogizing herself, noted that her MC job is actually meant for the market people.