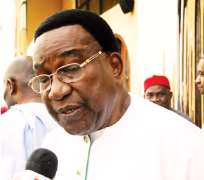 The former Governor of the old Anambra State, Jim Nwobodo has disowned his children from his first wife, saying they're not his 'flesh and blood.'

The embattled ex-Governor told newsmen that two of his children; Chukwudi and Nonso Nwobodo, who allegedly stole the corpse of their older brother, Ifeanyi Nwobodo, who died in November, after a battle with cancer, have been disowned by him.

It could be recalled that last week, there were reports that Jim Nwobodo refused his first son to be buried inside his compound, insisting that he should be buried outside. But his brothers refused and took his corpse away.

The ex-governor has however addressed the problems he's having with his sons.

"This is not really a very happy occasion for me – at my age, I should be talking about peace and not to get involved in something like this. Ifeanyi was my first son and unknown to us, myself and my wife, his family hid him.

“When we got to know that he was sick, we were very worried, we made sure he was taken to the best cancer hospital in the US.”

"From the day he died, I started planning for his burial. Because of politics, I felt that I should bury him before the primaries.

“Chukwudi and Nonso (Ifeanyi's siblings) came to see me here and I told them that the burial will be in two weeks time, that they should come back so that we could plan for it.

“You start to wonder- what kind of children are these? The press said I have two wives – it is not true. I divorced her (former wife) before I became governor. I have the divorce papers, please don't refer to me as having two wives. I am a decent man. I have only one wife. Please save me the trouble and embarrassment of talking about matrimonial trouble, the church will not wed me if I have two wives.

“My children love me. It is only children that are not yours that will seize their brother's dead body. If they can steal the dead body of their brother, it is terrible, unprecedented.

“They suggested the church and when the Bishop approached me, I accepted. The Bishops started preparing for the service, but till date the same people disappeared. If they say a word, I will tell the world what they have done and the entire world will spit at them”."If you are a father, you put the date for your son's burial and these riff-raffs put a new date, will you go?” he narrated.