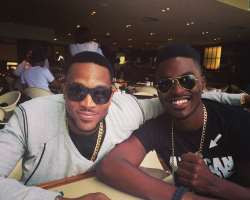 The just-concluded Big Brother Africa (BBA), Hotshots, was not without a controversy as some Nigerians believed the country's representative at the reality game show, Tayo Faniran was cheated and should emerged winner of the show.

Tayo was announced runner-up of the competition that produced Tanzanian dude, Idris Sultan as winner of the $300,000 prize.

One of those who believe Tayo should have won the 2014 edition of the programme is D'Banj, who has endorsed his fellow countryman as an Agricultural ambassador.

D'Banj congratulated the former BBA housemate and also identified him as his own winner and the new ambassador for 'One in Africa and Nagropreneur (DoAgric) campaign.