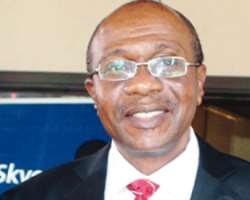 The Governor of the Central Bank of Nigeria (CBN), Mr. Godwin Emefiele, will on Friday (today) unveil the Federal Government's 2015 economic policy direction at the 48th annual bankers' dinner in Lagos.

The event is being organised by the Chartered Institute of Bankers of Nigeria.

A statement by the CIBN quoted the President/Chairman of Council, Mrs. 'Debola Osibogun, as saying that top bankers and other key stakeholders were anxiously were looking forward to knowing the mindset of the government for the coming year.

This, she said, would enable them to align their various activities especially in the wake of declining oil prices.

It added, 'The dinner which is will attract captains of industry, top government officials, members of the diplomatic community, as well as major stakeholders in the public and organised private sectors of the economy.'

Osibogun is expected to use the forum to review the strategies to drive the institute's programmes and activities as well as reposition banking profession in 2015.