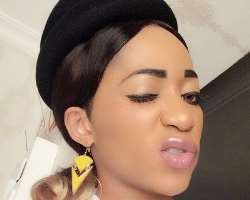 Rukky Sanda is one Nollywood actress who has had a steady rise in her career ever since she made her debut into the movie industry.

To stand out and perfect her facial look, it was rumoured that the screen diva had a plastic surgery. Confirming the speculations, few days later Rukky took to her Twitter handle to clear it all saying she got the dollars and had to fix her face. The talented script writer and interpreter equally disclosed that plastic surgery isn't a sin.

Just a while ago, the Banking and Finance graduate of Lagos State University shared some pictures with a makeup that stands her out from the crowd.

Rukky, an actress turned scriptwriter and producer featured in her first movie, Angel and the Beast in 2004 whilst still a student at the University. After that, she took a three-year break and returned to the industry in 2007 and hasn't looked back ever since. Recently, she has spread her wings into movie production and is working on a number of projects.© 2014Nollywoodgists.com