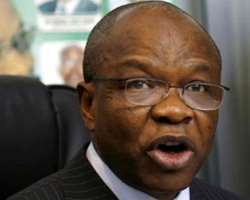 A former Chairman of the Independent National Electoral Commission, Prof. Maurice Iwu, has listed pitfalls that must be avoided for the 2015 elections to be successful.

Iwu, according to a statement on Sunday by RealNews magazine, spoke at the second anniversary lecture of the online news magazine in Lagos.

Iwu, who was the Guest Lecturer at the event, said though it is evident that those who have predicted Nigeria’s collapse in 2015 will fail, urgent steps must be taken to address such issues as electoral violence, influence of money politics, the negative mindset of Nigerians, internal democracy within the political parties and the reluctance of women to participate in politics and elections.

The former INEC boss said everything must be done to ensure that violence does not mar the elections as there are already signs that some Nigerians who are desperate for power at all cost would do “just anything” in the bid to achieve their aims.

He said such people are those giving the doomsday prediction that Nigeria would break up in 2015 more grounds to spread.

He expressed confidence in the ability of President Goodluck Jonathan to keep the country one.

He said a lot of Nigerians are underestimating the capacity of Jonathan to deal with issues and situations firmly, adding: “He is one of the most focused Nigerians I have ever met.”

Iwu said following closely on the heels of the issue of violence is the mindset of Nigerians that the country can ever do anything right.

He said such a negative mindset does not even enable Nigerians celebrate feats achieved by the country from time to time.

He cited the 2007 elections that culminated in the transition from one democratic government to another as a major watershed that was not valued by Nigerians.

He said when this happened in Pakistan, just at the 47 years it first occurred in Nigeria, Pakistanis celebrated the feat, while Nigerians rubbished it.

Iwu admonished: “INEC is made up of human being.

“They can make mistakes.
“We should encourage the correction of those mistakes rather than throwing the system into chaos.”

Iwu also said the time had come to curb the influence of money in politics and instil internal democracy in parties.

He said it is by doing this that those with great ideas who are not moneybags can freely partake in the political process.

He said the multiplicity and jumping of parties in Nigeria was because politicians believe if they cannot get justice in one party, they should move to another.

On the involvement of few women in politics, Iwu said Nigeria cannot make the giant leap it wants until more women are involved in the political process.

He said if the environment becomes right, there would be very little need for the involvement of the police and military in the electoral process.

He added: “Political parties are becoming the preserve of an exclusive few.

“We exclude our best and brightest and this should not be so.

“The electoral environment has its own peculiarities, which must be addressed.

“The prospect for future elections are very bright.

“We should have faith in ourselves, but note that mistakes must be made.”

The Managing Director of Nigerian Export-Import Bank, Roberts Orya, said Nigeria must continue in its quest to continually improve on its leadership.

Orya, who spoke on: “Economics implications of getting the right leadership,” said leaders only leverage on the quality of people around them.

He however said no matter how bad it is assumed a decision made by a leader is, it is “better to make a decision that is unpopular than not making one.”

Orya said the notion that a leader must know it all is wrong, adding that leadership is central “to economic development.

“It is just the sincere pragmatic application of the principles of leadership.

“Each of us just need to play our roles.”

The Publisher and Editor of RealNews, Maureen Chigbo, described the lecture as the online portal’s contribution to the development of Nigeria.

Chigbo said the magazine hopes to do more in the years ahead.