​​Amaechi: A Factor to Determine Who Occupies Aso Rock in 2015 - Ex-New PDP Spokesman 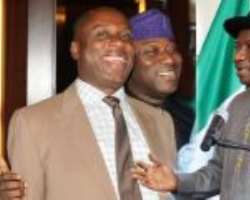 Rivers State Governor, Rt. Hon. Chibuike Amaechi, has been described as a strong factor in determining who occupies the Aso Presidential Villa after the 2015 elections. Amaechi, according to former National Publicity Secretary of the defunct New Peoples Democratic Party (nPDP), Chief Eze Chukwuemeka Eze, has over the years acquired the requisite political stature to influence the outcome of the current jostling for who succeeds the outgoing President of the Federation, President Goodluck Jonathan.

“Although Amaechi is eminently qualified to be President and would make a good one if given the opportunity, his preoccupation at this moment is to flush out the evil regime of PDP come 2015 but if the All Progressives Congress (APC), of which he is one of the pillars, decides to support him for any elective post, so be it,” Eze said in a statement in Port Harcourt.

Chief Eze, a political ally of Rt. Hon. Amaechi, described the Governor as a political genius with a Midas touch. “His mobilisational and organisational expertise account for why he has been able to serve as a two-term Chairman of the Nigeria Governors' Forum (NGF), his feats as Rivers State Governor and APC's deep penetration of Rivers State and other parts of the South-South in so short a time. Amaechi's key roles in stabilising and repositioning APC and his contributions towards the growth of the party speak eloquently of his relevance,” Eze said.

The Ex-New PDP Spokesman opined that a ticket of retired Gen. Muhammadu Buhari and Governor Amaechi is the best APC could possibly present for the 2015 presidential election but quickly added that it is left for the party's delegates and leaders to do the right thing with regard to who flies the party's flag in the election.

“I have read a lot about a probable Muslim-Muslim ticket in the party but that is not advisable in the present circumstances in the interest of a united Nation and mission to rescue Nigeria from the shackles of the impunity experts in PDP ruining our nation.. The winning ticket is one that features a strong candidate of Muslim extraction and a strong candidate of Christian background. A Buhari-Amaechi ticket would just be perfect. I don't see how Goodluck Jonathan and whoever is paired with him can survive in a free and fair contest against Buhari and Amaechi,” Eze said.

The above calculations notwithstanding, Eze further counselled that it is imperative that the APC Leadership must unite to rescue our nation from the hands of the evil cabals that have hijacked governance in the country? “The fate of our country can only be ratified and put back on track if APC Leadership and members unite to get PDP sacked by 2015. If not, the woes ahead on all of us may not be described. We have done too much talking! The fact remains that should APC lose out in the 2015 general election, but God forbid, the true colour of President Goodluck Jonathan will be revealed to Nigerians. And the heat may be unbearable. The ball is now in the court of APC leaders to do that which is necessary to rescue our dear nation from the imminent doom that awaits her, should we fail in this mission”.

Eze congratulated Rt. Hon. Aminu Tambuwal the Speaker of the House of Representatives for his statesmanship conduct by withdrawing from the Presidential race of the party to ensure that we as a party unites to rescue Nigeria from the hands of misguided PDP Leaders holding our nation hostage. He urged all APC members to emulate and compact themselves with the wise counsel contained in the Speaker's speech, “To all my associates, colleagues, friends, admirers across Nigeria who have faith that I am that instrument for the change we all desire, I assure you that your faith is not in vain, it is noble and will endure until this great nation of ours is rescued from the clutches of institutionalized corruption, gross incompetence, greed and divisiveness. I charge you to be comforted that your strength lies not in the limited capacity of a single leader, but rather in the collective capacity of the millions of great citizens of this nation.. One day, and I believe not too long away, this formidable collective capacity will be ignited and the good Lord will lift Nigeria high up where she belongs.”