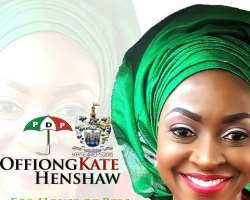 Top Nollywood actress, Kate Henshaw has made a move to get fund to further make her political ambition a reality. Her latest move is to solicit for fund from friends, fans and well-wishers to bankroll her political campaign.

This might come as shock to some of her fans, who believe she is one of the biggest earners in the movie industry in Nigeria, due to the corporate endorsements she boasts of.

It would be recalled that Kate Henshaw endorsed Glo, Onga, Samsung and Naija Got Talents, which many believe would have made her bank account swell considerately.

Recently, a bank account was opened for her campaign and the general public urged to make donations.

Insiders alleged that there have been considerable responses from people, who have donated generously towards the actualisation of her political dream.

Two different accounts have been opened in the name of Kate Henshaw Campaign with a popular commercial bank. The account numbers are 1004636127 and 5366103848 (Domiciliary accounts).

Nollywoodgists.com contacted Kate Hensahw on Wednesday morning to confirm the authenticity of the bank accounts opened for her campaign, which she affirmed to be true. However, she told us that the accounts were opened by her friends.

Not too long ago, Kate Henshaw told Sahara TV that she was not into politics for money but for change. “Vote for me if you want change,” she had declared.

Kate Henshaw hails from Cross Rivers State and hopes to represent Calabar South Constituency at the House of Representatives on the platform of the Peoples Democratic Party (PDP).
© 2014Nollywoodgists.com