Revealed: Chris Oyakhilome in Fresh Plot to Save Pastor Ehigiator from Murder Charges 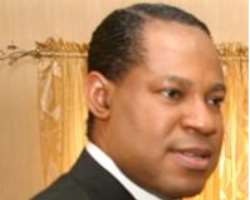 Despite barrage of reactions from a number of critics who have been challenging the frequent feature of Christ Embassy Church, its Pastors and ultimately the founder, Pastor Chris Oyakhilome, in various bizarre and disturbing stories, these critics would still have the reasons to express their delight or displeasure even more, as such stories have seized to break from the same Church whose leadership has been enmeshed in series of corrupt act, sex scandal and every other unprintable immoralities.

Recently huhuonline.com gathered that a case has been instituted against Pastor Joseph Ehigiator, at High Court 1 in Benin City by family of the deceased (his wife), they are claiming that the pastor killed their daughter late Pastor (Mrs.) Efe Ehigiator (nee Omoroguipon), in cold blood last year, 2008. The family resides at No 33 Ukhegbe Street, Benin; the bereaved family cannot still get out of the shock of their beloved one especially the father Rev. Innocent Omoroguipon. Indications however show that Pastor Oyakhilome is doing everything possible to free Pastor Joseph Ehigiator who is one of their own from the murder charge. A source confirmed that since the whole escapades began they have since been seeing the hands of Oyakhilome in the whole process in an attempt to free the man who is at the centre of the storm. Immediately the incident happened the husband took their 5 year old son and ran away. And to facilitate his escape from justice, Christ Embassy people organised security escort for him from Sapele to the church headquarters in Benin . This is not known to anybody and the Police were about to declare him wanted. Along the line, the Police got information that he was hiding at Christ Embassy and they moved in to effect his arrest, Police were told he was not with the church. The matter was subsequently reported to Police AIG he instructed them to provide him all cost. Suddenly, as if it was one of his miracles, Pastor Oyakhilome appeared in Benin along with wanted Pastor, the girl friend and the gardener.


Pastor Joseph Ehigiator and late wife(Efe).
It becomes astonishing that he was in Benin when they were about to break the door of the church to apprehend the pastor who was alleged to be hidden there. Since then, Pastor Chris Oyakhilome has been trying to use his connection and money to free the pastor, doing everything possible to frustrate the family in his bid to save the battered image of the church. Late Pastor (Mrs.) Efe Ehigiator was formerly Deputy Manager of UBA plc, Sapele branch before her untimely death, and was married to Pastor Ehigiator over 8 years ago before the unprecedented tragedy. Huhuonline.com gathered that the deceased had earlier called the marriage off some years back, resigned her appointment with UBA and travelled to UK. But while in UK she met Pastor Chris's wife Anita, who advised/counselled her to settle with her husband and return to Nigeria after about 2 years of separation. Heeding the advice of her 'spiritual mother' she came back to Nigeria and informed her father who opposed the re-union, knowing that it will not bring any good results since Pastor Joe had earlier sent people to them that he is no longer interested in the marriage. But against the family's wish, she went back to him.

Consequently, available facts disclosed that Pastor Ehigiator who was meant to be conducting a vigil that night returned to the apartment where Efe was and for the unsusupecting Efe, when she saw him she was said to have been profusely elated to see her husband coming to see her at home, in anticipation that it was God who brought him through her prayers. She welcomed him and was even said to have prepared a meal for him not knowing that that would be the last super she would prepare on the planet earth. Four days after (on April 26) her body was said to have been found by church members who visited her to visit how she was faring. It was these church members that informed her family members that her body was laying critically in the hospital. Meanwhile when her family members got to the hospital they were confronted with great shock of their lives when they were told that she was brought in dead (BID) and that examination conducted on her showed a mark around her neck region which indicated a broken bon, evidence that she was strangled to death in cold blood with her 8 months pregnancy. Right now the family is waiting patiently for the outcome of the court case, which they know that Oyakhilome and his men are trying to influence as they did when Pastor Oyakhilome brought Pastor Joe to the Police station and was trying to secure bail for him. But the Police vehemently insisted on thorough investigations to the murder. But the anxiety of many people is that with the enormous money at the church's disposal they can do anything to favour their pastor at the expense of deceased whose life was summarily quizzed out.


Pastor Tom Amekhiena
Further retrospective checks revealed that the gory details became public knowledge when Pastor Joseph Ehigiator fled after committing the heinous crime but was arrested in the inner sanctum of the Benin headquarters of the church by detectives from Zone 5 Police Divisional Headquarters, Benin, Edo State. A petition written by the father of the deceased, Reverend Innocent Omoroguikpon, to the Assistant Inspector General of Police in charge of Zone 5, Mr. Udom Ekpoudom, evidently exposed the circumstances surrounding the woman's death and pleaded for the AIG's intervention to act dispassionately over the matter. Rev. Omoroguikpon disclosed that on Saturday, 26 April 2008 around 3 p.m., he received some strange visitors from Christ Embassy who told him that his daughter had been shot by armed robbers at her residence and was receiving medical attention along with her husband at an undisclosed hospital in Sapele. “On getting to the hospital, the doctor denied ever admitting her husband and upon examination, the doctor discovered that the deceased was brought with cyanosis subconjunctotival petechia and evidence of a noose mark around her neck,” Rev. Omoroguikpon narrated.

He disclosed further that the doctor confirmed that she had an unduly floppy neck (indicative of broken neck), an evidence that she was strangled. He urged Ekpoudom to act fast and prevent Pastor Ehigiator from fleeing the country because he holds a valid British visa which can aid his escape during that period. He also informed the police boss that Ehigiator had earlier planned to relocate to the United Kingdom with his girlfriend, Miss Oweil. Going down memory lane, the distraught father explained that the bitter acrimony between his daughter and her husband started in 2005 when the deceased learnt of the relationship between Pastor Ehigiator and the church secretary through some members of the church. The father of the deceased woman disclosed that whenever the deceased complained she was always beaten up and injured. “Over time, when the beating became so frequent because of the girlfriend, I had to call the attention of Pastor Tom Amienhkienan, head Pastor of Christ Embassy, Benin City. “Upon his intervention, the mistress was transferred from Sapele last year. “When Miss Oweil found her way back to Sapele late in 2007 to resume work as secretary in the same church, my daughter, who was already three months pregnant, informed the husband and his reaction was that she should terminate the pregnancy because he was not ready for the baby. “Her refusal to terminate the pregnancy, coupled with the fact that his mistress was back in Sapele, led him to pack his belongings out of the house to a new apartment, which he did not disclose to his wife. “But within the same time he packed out, my late daughter received text messages threatening her life and that of her only son. Each time the man (Pastor Ehigiator) came and she reported the matter, he (Ehigiator) would seize her phone. This was why over the last four months she had to buy several phones which were seized and never returned to her.

“On the fateful night she was murdered, he came to the house where my daughter lived at about 10 p.m., having abandoned her for no reason, the regular end of month prayers over which he was supposed to preside as the head Pastor of the church,” the father stated in his petition. He asserted that records show that “the suspect left the church at about 10 p.m. when he handed over the moderation of church activities to an assistant pastor, and it was within the same time and early Saturday that the deceased was murdered, after which the suspect escaped. Reverend Omoroguikpon also expressed dissatisfaction with a purported autopsy conducted at Sapele, saying “there is new information to exclude the fact that she was murdered by strangulation and this portrays foul play. “We cannot explain why the autopsy finding is trying to pin what happened to an ongoing illness which we cannot name. Why would it be when she allegedly had an attack by robbers that the sudden illness came up? There were several other physical findings on her body (bruises and blisters) that they could not provide answers to. It therefore meant that the autopsy was tampered with,” Reverend Innocent Omoroguikpon said. However, Police Public Relations Officer of Zone 5, Mr. Ebi Orubiri, an Assistant Superintendent of Police ASP, said the suspect was being detained along with the church secretary at Sapele, before the case was transferred to the zone following a petition to the AIG in that respect. Orubiri hinted that detectives from the zonal Criminal Investigation Bureau, CIB ,and the Criminal Investigation Department, CID, have commenced investigation into the matter which will be made public in the shortest possible time.