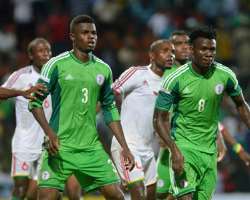 'To be or not to be.' That is the question Stephen Keshi and his boys will answer this afternoon in Pointe Noire, Congo, where the Red Devils will host Super Eagles in a decisive African Nations Cup qualifier.

The Confederation of African Football (CAF) Friday named Equatorial Guinea as the hosts of the 2015 edition of the continental showpiece in place of Morocco, who declined to stage the event because of the current Ebola virus scourge raging in some parts of the continent. But the defending champions, Nigeria, are in danger of missing from the line up when the whistle sounds in Malabo in January. To avert such happening to the Super Eagles for the second time in six years, Keshi and his boys must beat Congo Saturday.

Ordinarily, a game between Congo and Nigeria anywhere in the world would not cause trepidation among the Eagles' fans, but events in recent times have turned the country's football fans to prayer warriors.

Congo came to Calabar to defeat Nigeria 3-2 and another victory over the Eagles today would signal the end of the country's ambition in the championship, a competition which Keshi and his boys were planning to become the third team since Cameroun (2000, 2002) and Egypt (2006, 2008, 2010) to win back to back. Things don't look good for the Eagles.

The team left Abuja on Thursday for Pointe Noire complaining of the inadequate time they had for preparation for the game, which would be played on a synthetic pitch. Aside from the home-based players in the team, the other members of the squad are not used to artificial turf. That was evident in the 0-1 loss to Sudan in the penultimate qualifier, but Keshi says there is no cause for alarm.

Although Keshi has been boasting that his team would turn the table in Pointe Noire, observers are worried that the 2013 champions have lost the fear factor that usually gave them the upper hand over other African teams no matter how poorly they played. In Calabar and Abuja against Congo and Sudan respectively, Nigerians were stunned when the visitors took the game to the home team and even stole the midfield from the Super Eagles.

The country's situation is made more tasking by the fact tat the Eagles must win by two clear goals to still harbour the ambition of being in Equatorial Guinea next year. Congo are second in the Group A standings on seven points from four matches, three points ahead of third-placed Nigeria with only the top two teams guaranteed automatic passage to the tournament proper. The Red Devils also hold the advantage of having beaten the Super Eagles 3-2 in the first encounter in September and so Nigeria would now need to win by at least two clear goals on Saturday to shade on the head-to-head stats.

When the Red Devils beat Nigeria in September, they were clearly the better team. Nothing seems to have changed ahead of this game, as Almeria forward, Thievy Bifouma, who scored two goals and made the other in the reverse fixture, is still in his destructive best. The pacy forward showed his class last weekend when he led Almeria's attack against Barcelona in the La Liga, although the Catalans eventually won 2-1.

Also waiting for the Eagles is Romania-based Ferebory Dore, who is among the leading scorers in the qualifiers with three goals thus far. There is also experienced skipper, Delvin Ndinga, who missed the first clash against Nigeria in Calabar due to injury he suffered at Greek champions Olympiacos. He will be available for this match. Despite all these, Keshi still insists there is no cause for alarm.

'We have the players who can do Nigeria proud in the remaining games and I know somehow we will make it to the finals and retain our trophy,' Keshi said before the team left for Congo on Thursday.

The 'Big Boss' believes that his team would show their true colours today because they have learnt how to survive even when others have written them off.  'Any player given the chance to represent Nigeria must give everything to win the game no matter the condition,' he said, arguing that the artificial turf would not hamper his team's progress.

Hinging his optimism on the determination he has seen in his team, Keshi prays, 'I hope we just concentrate and continue with the same attitude and atmosphere and pray that everything works well for us in Pointe Noire.'

Keshi yesterday disclosed that contrary to reports, all the 25 players in his squad are 100 per cent fit and ready to fight the Congolese to submission if picked for the game.

He acknowledged that Skipper Vincent Enyeama had a 'slight' shoulder problem, while Mikel Obi and Raheem Lawal struggled with knee knocks, adding, however, that they are now alright.

The team's Euro-based stars struggled on the artificial pitch in Sudan last month and duly lost 1-0, but Turkey-based midfielder, Raheem Lawal, insists they cannot afford a repeat performance on the astro turf at the Stade Municipal in Pointe-Noire. 'I am more than ready to play on any kind of pitch in Congo. We need that match more than anything now and we must be ready to give our best on any kind of pitch to win,' he said.

Defender Efe Ambrose knows that qualifying for AFCON 2015 depends on the result against Congo, so he insists the Red Devils will fall. 'We know we have to defend the cup and for us to defend it, we must understand that Congo are on our way; so we won't want to toy with this opportunity we have because God knows why they drew their game against South Africa and we won,' he said.

There have been reports of a division among the players, which Ambrose acknowledges, but he adds: 'We just have to be together because when you are divided, you never get anything.

'Right now we are together and we are professionals and we know the importance and we know what we have to do.'

Having come this near to qualification, Congo coach, Claude Le Roy, says his team would do everything possible to win the solitary point they need to pick the Nations Cup ticket.

Le Roy knows Nigerian football inside out having masterminded the Eagles' defeat on three different occasions. He led Cameroun to victories over Nigeria in the finals of the Nations Cup in 1984 and 1988 and also took Ghana to a quarterfinal defeat of Nigeria in 2008. He repeated the feat in Calabar in September.

The Frenchman, who has been in Africa since 1982, says his team have concluded the strategy that would give them the three points.

Congo needs to avoid defeat to keep their hope of picking up one of the two of automatic tickets in the group alive but Le Roy insist they will attack the Eagles but with one eye on their defence as well.

'I know the Eagles are going to descend on us. We've mapped out our plans to attack them as well as defend effectively to frustrate them,' Le Roy said.

'The danger in this game is that we might use counter-attacks to see off the Eagles.'

According to agency reports, the experienced trainer also said his team will guard the Eagles against using counter-attacks on them and their behind close door training on Thursday was meant to perfect their plan to stop the Eagles from exploring them on the break in Pointe Noire.

'We would have to plan effectively to attack and at the same time recover and defend well. We will guard against counter attacks,' he said.

The Eagles arrived in Point Noire to a frenzy of support from Nigerian residents in Congo and are also expected to have a decent amount of support on game day. The Guardian