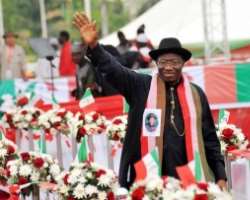 President Goodluck Jonathan, yesterday, declared his intention to contest the 2015 presidential election after months of speculation, contemplation and consultation,

With this declaration, the presidential race has assumed a new momentum as there are at least 10 presidential aspirants in the race now.

In a speech that was preceded by the observation of one-minute silence in honour of the over 47 school pupils killed in a suicide attack on Monday by suspected Boko Haram terrorists in a secondary school in Potiskum, Yobe State, President Jonathan said his decision to accept the call of many Nigerians was informed by his desire to ensure a brighter future for generations yet unborn.

President Jonathan's declaration, instantly elicited caustic reactions from the main opposition All Progressives Congress, APC, which said by declaring his bid yesterday President Jonathan is insensitive to the plight of survivors and 47 school children, who were killed in a suicide bomb attack on Monday.

While acknowledging the myriads of problems facing the country, the president said the hallmark of a good leader is not to take flight in the face of challenges but to confront them.

He said: 'History has shown that the path of honour of a true leader is not to walk away from his people in the face of challenges. We must stand together in adversity and overcome the threat to our development. We must defend our future.'

According to the President, his decision to seek re-election was informed by many factors, adding that though the country under his watch has done well, there is still more room for improvement.

'So many things have inspired me in the journey to this moment. I want to appreciate ordinary Nigerians, especially young people for the solidarity shown me by contributing their meagre resources to enable me arrive at this point. I appreciate the kind gesture of the Miyetee Allah, the market women association who encouraged me by committing some funds to support me. In the same vain, I'm touched by the widows who also encouraged me by giving me their widow's mite.

'Therefore, after seeking the face of God and consulting my family and heeding to the call of all people   nationwide to run, I Goodluck Ebele Azikiwe Jonathan, have accepted to present myself to run,' he announced.

The President promised that under his presidency, 'your views, no matter how freely expressed, will not send you to prison or to exile. I am convinced that I have served my pact with Nigerians and it is now time to look into the future. With your tremendous support, you have collectively done so much in the last three and a half years. But to take our country to the next level, there is still more work to be done.

'We must continue to hold the tempo all high in our country. I am proud to say that there are no political prisoners in Nigeria today. No Nigerian has been driven to exile, no one and I repeat no one will be driven to exile. It is in furtherance of a peaceful, participatory and inclusive democracy that I signed the Freedom of Information Bill into law to expand the frontiers of our fundamental freedom.

The president promised Nigerians that the labour of love demonstrated by them 'has increased my labour of love of your solidarity, your trust in our joint destiny and all we have achieved together these past years. I promise to work with all. I see a different Nigeria in the next generation.'

He continued: 'I promise that we cannot go back to the era where our terminal buildings were an eye sore, importing food, where women were deprived from holding sensitive position. I promise to work with you. I see a different Nigeria that will take us to outer space. I see a Nigerian that you can hold any office not based on ethnicity , I see a Nigeria that our young men and women will have work to do.'

While enumerating the various achievements recorded by his administration in various sectors of the economy, the president said he will strive to do better.

On the economic challenges facing the country, Jonathan said no stone will be left unturned in ensuring that normalcy is restored in the North eastern part of the country where the activities of insurgents are most serious.

He said every efforts are being made to ensure that the over 200 girls abducted by terrorists in Chibok, Borno State in April this year are reunited to their parents safe and sound.

The ceremony, which was held at the Eagle Square, Abuja saw the major part of the Central Business District locked down and vehicular traffic diverted about 300 meters away from the venue of the event.

A combined team of security services drawn from the Army, Police, Civil Defence Corps, Department of State Services (DSS) and other security agencies maintained a water-tight security around the Eagle Square and inside the arena.

President Jonathan, who arrived the venue with his wife, Patience, was heralded into the VIP stand with a rapturous applause from thousands of supporters who thronged the square to witness the event.

Vice President Namadi Sambo described President Jonathan as a blessing to Nigeria, adding that with him, Nigeria has witnessed tremendous transformation.

Speaking at the event, Senate President David Mark said President Jonathan has demonstrated trust, dedication and steadfastness to the service of his fatherland which has made the National Assembly to adopt him as the PDP sole presidential candidate. Stating that the National Assembly will continue to support the President, he added his sterling qualities and the ability to deliver was the reason behind various endorsements by different segments of the society.

Mark who led PDP legislators (Senators and members of the House of Representatives) to the ceremony disclosed that the endorsement of Mr. President was based on his people-centered transformation programme that needed to be executed to its logical conclusion. - Vanguard.