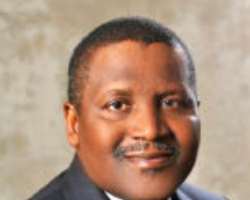 Nigerian business mogul, Alhaji Aliko Dangote, has retained his position as Africa's richest man with a $25 billion net worth.

He has held that position for the fourth successive year.

Globally, the influential Forbes Magazine rates him on the list of 25 richest people in the world.

Dangote is ranked 23 up 43rd among the 100 richest persons in the world.

The Nigerian businessman with interests in cement, sugar, beverages and petrochemical is said to be presently the first black man to break into the rank of top 25 richest people in the world.

Mike Adenuga, owner of indigenous telecoms company Globacom, was next to Dangote on the list with a wealth of $4.6 billion, maintaining 325 position in the world, while Folorunsho Alakija, with $2.5 billion, was 687 in the world and Abdulsamad Rabiu ranks 1372 in the world, with $1.2 billion.

Meanwhile, Bill Gates is back on top after a four-year hiatus, reclaiming the title of world's richest person from telecoms mogul, Carlos Slim Helu of Mexico, who ranked number one for the past four years.

Spanish clothing retailer, Amancio Ortega (best known for the Zara fashion chain) retains the number three spot for the second year in a row, extending his lead over Warren Buffett, who is again number four.