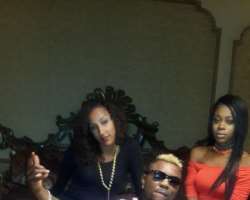 
After the last video he released with, Davido Adeleke, Sexy Lady, the Mercies of the Lord exponent arrived U S on Sunday to team up with the Koko Master in order to shoot the highly rated video.


The video which is being directed by Moe Musa will hit the television screen any moment from now, according to Oritsefemi's Media Manager, Tijani Adegbola.


“Oritsefemi traveled to Los Angeles, U S A to team up with D Banjo to shoot the video. He has been on this video for almost three months. Part of the video was shot in Malaysia while others were shot at Los Angeles and Miami U S A,” he said.

However, the delta state, born star artiste released new song few days ago, titled Culture. The song is making wave online as you are reading this piece.