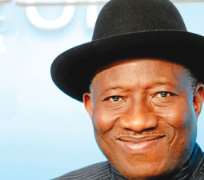 The Peoples Democratic Party (PDP), on Thursday, announced that the national leadership of the party has decided to offer automatic tickets to all its first-term governors.

The National Chairman of the PDP, Alhaji Adamu Mu'azu, stated this at the party's national headquarters in Abuja, when President Goodluck Jonathan picked the nomination form to contest the 2015 presidential election on the PDP platform.

Mu'azu stated that, 'We have decided that our governors and President running for a second term will be given the right of first refusal and all of us know that Mr. President has done so many things.'

Governors who are serving first term in office are those of Bayelsa, Gombe, Kaduna, Kogi and Kebbi states.

President Jonathan was endorsed as the sole presidential candidate of the party by the NEC and other organs of the party.

Jonathan, who spoke while picking his nomination form at the party's national headquarters in Abuja, said he would still have bought the nomination form without the endorsement given to him by the national leadership of the PDP.

However, the President said that he remained grateful for the gesture, which he said, was the first in the history of the party.

President Jonathan said, 'I could have still picked the form if they did not give me. But giving me the right of first refusal has attracted more people than ordinarily it would have had.

'Your Excellency, our chairman, thank you and extend our appreciation to other great members of our party, especially members of the NEC who unanimously endorsed that decision.'

Others who donated to the campaign, according to him, included the Transformation Agenda of Nigeria, which he said, also provided N22m.

He promised to work with all Nigerians, just as he said it would be difficult for any president to perform without the support of the people.

He said, 'What I can say is to reassure them that I will work with all Nigerians, and I will always maintain that no matter how strong a President is all over the world, the President is only one individual and he alone can't do everything; he alone cannot change the society.

'For you to succeed, you work with people. So, if you are succeeding, that means we have a team that is working to transform this country. So, I will work with all Nigerians to make sure that we move our country to the next level.'

He said if Nigerians could work together, the country would be great, saying that the whole world was happy with the country with the way it fought the Ebola virus.

Earlier, the National Organising Secretary of the party, Alhaji Abubakar Mustapha, had after handing over the forms to the President described Jonathan as the most amiable and humble leader in the history of the party and the country.

He thanked Mu'azu for allowing the event to hold at the NEC hall, instead of the NOS office, which he said was too small to accommodate the crowd that followed the President.

While presenting the forms to the President, he said, 'I wish you the best and may the God Almighty be with you.'

Jonathan was accompanied to the party secretariat by his deputy, Namadi Sambo; Secretary to the Government of the Federation, Senator Pius Anyim, ministers and other aides.

Among the governors that followed him were those of Delta, Akwa-Ibom, Enugu, Ondo, Bayelsa, Katsina, Cross River and Ekiti states.

Meanwhile, two other presidential aspirants who stormed the party with their supporters on Tuesday with their bank tellers and receipts from the party were refused sales of the nomination forms by the leadership of the ruling party.