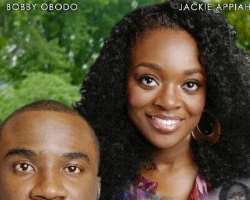 Nigeria's actor, Bobby Michael, could be described as an easy going fellow who talks less but gives in his best while on set, has been in the front burner with viral reports of him in hot romance with Ghanaian actress, Jackie Appiah.

The soft spoken actor has denied the rumour, stating that there is no truth about the relationship saga with Jackie neither is he planning any marriage with her or any other woman.

Bobby noted that his relationship with the actress is nothing serious. Accusing rumour mongers of spreading false stories about him and trying to take advantage of his failed marriage.

The actor added that he has gone through a lot in his failed marriage which produced wonderful kids and would rather not wish for another relationship for now but to stay focused on being on top of his game in the entertainment industry. “My relationship status is 'complicated' because I was married and later got divorced so since then, I have been keeping my private life abreast.”