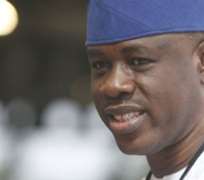 IN the first quarter of 2014, Lagos State witnessed proliferation of governorship aspirants from various political parties. In such a situation, it is normal for aspirants to be anxious about their eventual fate in the race.

But as events unfolded, it became clear that some of these aspirants were merely using their declaration of interest in the contest as a bargaining chip for alternative political appointments.

Thus, by the end of the second quarter, the rains had washed away many of the posters and banners of the aspirants that littered the states, and there was little effort to replace them. At present, some banners are fluttering in the air in tatters.

Field surveys show that many weak aspirants in the different parties, unsure of making any headway, are tactically withdrawing from the race.

Some of the aspirants in the All Progressives Congress (APC), which recorded the largest number of contestants, are honestly working round the clock, while others are beating the corridors of former governor of Lagos State and a leader of the APC, Asiwaju Bola Ahmed Tinubu, trying to press all the political buttons for the party's ticket.

Unlike in the APC, not many aspirants showed interest in the governorship ticket of the PDP. This was attributed to the strength of the party, and its low elitist patronage in the state.

PDP shops for 'right' candidate
One of the most pressing concerns for the PDP in Lagos is how to get the right candidate that will deliver the state to the party in the presidential election and particularly in the governorship poll.

A source close to the presidency explained that President Goodluck Jonathan and the party hierarchy are ruminating on whether to present the 2007 governorship candidate of the Democratic Peoples Alliance (DPA), Mr. Jimi Agbaje, who recently defected to the PDP.

With the defection already causing rancour within the rank and file of the party faithful, the PDP is said to weighing Agbaje's ability to achieve the desired result of "capturing Lagos" for the party, a dream it has nurtured and sustained for the past 15 years of return of democracy in the country.

The option is for the party to pick former Minister of State for Defence, Mr. Musiliu Obanikoro, who contested and lost the governorship to Mr. Babatunde Fashola in the 2007 elections.

Obanikoro resigned his Defence portfolio last week to make way for his ambition.

But from the grapevine, one of the facts the PDP has been able to gather, not from politicians per se, is that the political actors in the state are seriously sceptical about giving their party ticket to a "stranger," a reference to Mr. Agbaje.

According to sources, this doubt is in consideration of what the likes of Governors Ibikunle Amosun and Abiola Ajimobi of the main opposition APC are doing to their party structures in the respective states of Ogun and Oyo.

To them, "the Agbaje project" should be thoroughly scrutinised, "to avoid party squabbles should he be given the ticket, and in the future call the bluff of PDP stakeholders after getting hold of power."

Besides, Agbaje, who is supposed to slug it out with Obanikoro, has no structures in the party. Moreover, the rumour that he was planted in the PDP as an APC mole has pervaded the political air in the state.

On the other way round, can Obanikoro triumph in Lagos, if he gets the ticket? The state polity watchers think so, on the strength of his assumed structures on ground, "and the fact that he could use his newly-acquired power as Minister of State for Defence to maximum effect."

For instance, at a stage, the PDP platform was left for Obanikoro, Ade Dosumu, the PDP Lagos governorship candidate in 2011 and Agbaje.

(Like other PDP aspirants who are no longer showing enthusiasm for the ticket, Dosunmu's interest has reportedly put the hope of his supporters at a low ebb.)

It is also being dismissed that the long-time sour political relationship between Obanikoro and the Lagos-based PDP national leader, Chief Bode George, may not be a barrier to his aspiration for the party ticket.

"No doubt, Obanikoro has a solid structure in Lagos PDP and also has the Aso Rock connection," said a source at the weekend. "Not even the entrance of former governorship candidate, Mr. Agbaje, will stop the (former) minister from getting the PDP ticket, unless Mr. President decides otherwise," the source said.

"So, it is not an overstatement to say that PDP's last hope in the race is Obanikoro," the source added.

Besides Messrs Agbaje and Obanikoro, who else has the capacity among other aspirants that the PDP is parading? Only time will determine this.

A 'clear' candidate in APC
SIMILARLY in the APC, the number of politicians aspiring to the position of governor has dwindled, with some of them switching their attention to other portfolios, such as membership of the National Assembly.

It appears those still in the race are doing so in order not to disappoint their supporters outright. Otherwise, they would have thrown in the towel because it is becoming obvious that the contest for the party ticket is narrowing down to between Mr. Akin Ambode on the one hand, and the remaining aspirants on the other hand.

Ambode, a former Accountant-General of Lagos, has the backing of the APC 'supreme' leadership for the gubernatorial slot. He was the first, and only aspirant to be openly endorsed by the revered Oba of Lagos, HRH Rilwan Akiolu.

Although the endorsement raised a lot of dust within and outside the party, nothing has been so far to mitigate it. Instead, the man is waxing stronger, reportedly riding on the back and prompting of Asiwaju Tinubu.

For this singular reason, and other contentious considerations, such as the issue of a Christian governing Lagos in 2015, some of the aspirants have to review their ambitions.

For instance, the banners of the gentleman politician, Senator Gbenga Asafa, now carry the inscription: 'Ashafa for Senate 2015' as against the initial 'Ashafa for Governor 2015'.

Indeed, the Senator announced his withdraw at a senatorial meeting a few weeks ago. He has even so declared in a statement signed by one of his media aides, Babatunde Adegunju.

Thus, Ashafa now has enough time to supervise his existing senatorial project in Lagos East, and as usual, he is embarking on fresh poverty alleviation projects. Luckily for him, he has no conspicuous contender for the Senate seat.

From a reliable source, there is no trust between the former Commissioner for Health, Dr. Leke Pitan and Chief Tinubu.

According to the source, “In 2011, Pitan got the tentative approval of the party leadership to contest the Lagos East senatorial district election. But he jokingly told some political friends that he did not trust Tinubu. The statement got to Tinubu, who, through a similar medium, retorted that he also did not trust Pitan.

“It will be recalled that Pitan, on trust, became a member of Tinubu's cabinet in the slot of the leadership of another faction in the defunct Alliance for Democracy (AD). But he (Pitan) later disappointed his then sponsor and stayed put with a new master. In this circumstance, Tinubu may be looking at his antecedents from the angle of reliability.

"But for these reasons, Pitan has worked hard. He generously distributed eyeglasses in all the nooks and crannies of the state. Although many people see his gesture as a Greek gift, his body language shows that he has accepted his fate.”

The Speaker of the Lagos State House of Assembly, Adeyemi Ikuforiji, showed his intention for the governorship, earlier than most of the aspirants, at a senatorial gathering in Ikorodu in the first quarter of 2013.

But he seems to have changed his style; he is no longer seen to be aggressive about his intention to succeed Fashola in 2015. Perhaps, his new disposition towards the race, going by informed sources, is to enable him face the challenges of the Economic and Financial Crimes Commission (EFCC) fully this time.

A Lagos High Court acquitted Ikuforiji for money laundering recently. But the EFCC has frowned at the judgement and threatened to go on appeal. Until the final judgement is delivered, nobody can foretell the precise outcome of any court case.

Therefore, observers knowledgeable in psychology, are attributing the Speaker's disposition to preparations for a fresh and more powerful defence against the EFCC. "So, he will need enough time to brief his lawyers, and get himself out of the legal yoke before anything else," said a respondent.

Any of these gentlemen can be governor, and creat a good chance for the APC. But according to sources, one of the fundamental problems confronting the party is that Tinubu and incumbent Governor Babatunde Raji Fasola remain taciturn about the common saying that the former is the sponsor of Mr. Ambode, and the latter is the benefactor of his Commissioner for Works, Dr. Hamzat.

However, in this political game of godfather versus godson, as regards the governorship of Lagos on the platform of the APC, "Tinubu is having the upper hand in his support for Ambode over Fashola's backing for Hamzat," a source told The Guardian.

Still, another source said that most of the APC aspirants and some aggrieved party leaders are teaming up to pick a candidate among the aspirants to face Ambode in the party primary election.

The team, the source said, "is looking at Dr. Hamzat, Dr. Kasali or Senator Solomon as its candidate." The caveat here is that the three aspirants are Muslims.

Speculations are that one of the aspirants has agreed to settle for the position of deputy governor, "making it difficult for the team to field both Muslims as candidate and deputy."

But investigations have shown that the three aspirants are not in absolute control of their constituencies, and the project seems not tactically strong enough to frighten Ambode and his main backer.

For instance, a high percentage of APC members in the Mushin area of the state are Tinubu's loyalists, who reportedly have an axe to grind with Hamzat for what they describe as "contempt" for their leader.

Hamzat used uncomplimentary words against Tinubu in a recent interview that he granted. Although he has apologised to Tinubu and has also written a rejoinder in a national newspaper, the people in Mushin "may not easily forgive him."

Furthermore, since Mushin is the political base of both Hamzat and Solomon, a split in the votes among Ambode, Solomon and Hamzat is expected there during the party primaries.

"In this regard, Hamzat and Solomon cannot enjoy a full home-base advantage in that political axis," said the source, adding that "in any case, Ambode controls about 75 per cent of the APC following in Lagos West senatorial district."

Owing to Dr. Kasali's reputation in his Ibeju Lekki home base, he has a say there, but when the chips are down, it is going to be a different ball game because his supporters at Ibeju Lekki "may not want to live in an island of their own."

Besides, Ikorodu has not fully made up its mind about the governorship slot, while Lagos East is Ambode's stronghold. Similarly, his structure is said to be "very reliable" in Lagos Central.

In any event, Oba Akiolu, his chiefs, the elite and the islanders are not hiding their support for Ambode. "So, the teaming together of some APC aspirants and aggrieved leaders will not be enough to stop Ambode from clinching the party ticket, unless his campaign is properly managed," said the source.

From the look of things, the coast is gradually getting clear for Mr. Akin Ambode to secure the APC ticket and slug it out in 2015 against the PDP candidate that is looking like an Obanikoro.