A nation of hungry people – Thisday 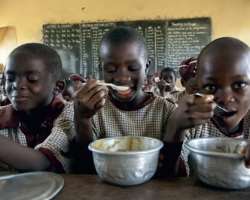 Nigeria is among the countries in the world faced with a high level of hunger threat despite its efforts at reducing hunger in the last 24 years, says the latest Global Hunger Index. In the GHI survey released last week, the country's index is 14.7 compared to Ghana's 7.8. According to the report, the higher the index score, the higher the hunger level. Nigeria's level is considered 'serious'. This year's report, focusing on 'hidden hunger' was compiled by the International Food Policy Research Institute.


It is instructive that in 2010, out of 118 countries that were ranked, Nigeria finished 20th, on the index, an indication of the seriousness of food scarcity in the country.  In response to the threat that year, the National Assembly expressed concern over desert encroachment in some Northern States, capable of aggravating the already worsening food crisis in the land. But beyond mere lamentation, there were no legislative initiative nor did the executive move beyond the self-adulation at the Federal Ministry of Agriculture to address the challenge. It is therefore not difficult to understand how a nation so blessed with arable land and abundant oil wealth cannot feed its people.


It is highly disturbing that since that poor ranking about four years ago, Nigeria has consistently been featured on the negative side of the different human development reports in the world. These reports indicate that life expectancy in Nigeria is nothing to crow about; real income of most families has woefully reduced; unemployment is scandalously high; Nigeria is topping the list of countries with malnourished children and that the quality of health and education services in the country has deteriorated considerably.


Paradoxically, successive governments in Nigeria have always initiated projects that promote agriculture even though most have failed to yield the maximum results due to corruption, structural weaknesses, mismanagement, undue politicisation, etc. For example, the second National Economic Plan (1970-74) of General Yakubu Gowon made agriculture a priority, but the results did not match the efforts. Between 1975 and 1979, General Olusegun Obasanjo as then military Head of State, initiated a gargantuan agricultural scheme popularly called Operation Feed the Nation (OFN).  The scheme also failed to tackle the country's food crisis.


Upon coming to power as the first Nigerian democratically-elected President, Alhaji Shehu Shagari introduced the Green Revolution Programme with a view to increasing domestic food production and curtail the increasing food import bills.  That programme also failed calamitously especially from the scandals surrounding the importation of rice. The military regimes of Generals Muhammadu Buhari, Ibrahim Babangida, Abdulsalami Abubakar and the late Sani Abacha made little or no efforts to boost food production in the country while the civilian administrations of Obasanjo, the late Umaru Musa Yar'Adua merely paid lip service to agriculture.


Now that our oil is drying out, the greatest challenge of the President Goodluck Jonathan government is to scale up concrete and systematic initiatives to boost food production in Nigeria.  The government must invest heavily in agriculture. If neighbouring countries are producing enough to feed their citizens, why can't Nigeria do so with all her natural endowments? The answer is that basic food production must not fall prey to power politics. Government and banks should develop schemes to provide credit facilities to farmers to invest in mechanised agriculture. Massive rural-urban drift decimating the rural farm workforce should be tackled by making the rural areas attractive for young rural job seekers.


The point has repeatedly been made that a country as richly-endowed as Nigeria should not be suffering from the scourge of food scarcity. Human development is the epicentre of all developments.  It is a shame that whilst Nigeria is beating her chest in euphoria of being the 'giant of Africa' and Africa’s leading economy, many of her citizens still live in hunger.