TO RUN OR NOT TO RUN? THAT IS THE QUESTION. 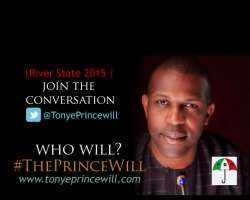 Virtually every single day people ask me if I am running, when will I declare, do I stand a chance and if I am really serious? My answer each and every time has been something to the effect of, "Watch this space. Time will tell." Today is that time.

I have always felt that unlike in 2007, the decision to run has to be borne out of a collective will to run, not an individual ambition borne out of a single, self absorbing or self-centred agenda. If I was to ask the question, I would have phrased it differently. My version would have been - "Will we run, do we declare, do we stand a chance and are we serious?" This can not be about just me.

Rivers state has always struck me as a state of huge potential, blessed with all kinds of resources most of which lay above the ground, not under it. I look at it, not with the eyes of what it is, but what it can be and consequently my mind has been focused on what it will take to get it there. Nobody rises to low expectations, not even a state so it is with these goals in mind, my team set out to chart a path to our collective prosperity. We all know where this state has come from. In 2007, we had a state that only a few of us were proud of. Almost eight years later, we run the risk of returning to that state. Violence, kidnappings, politics of bitterness and ethnic divisions have re-emerged and the peace we all enjoyed is flickering like a candle in the wind. What went wrong? We have to save this state.

People who aspire for office are sometimes bothered enough to go out of their way to tell the people what they will do for them courtesy of a manifesto. For that, we the people are grateful. But my team have always insisted that instead of starting with telling them what you will do for them, why not ask them what they would want first? One of the habits we learnt is to seek first to understand, then to be understood. Yes, Steven Covey taught quite a few of us. That is why in 2012, we carried out a baseline survey of the wants and needs of Rivers people across almost 200 communities in the 23 LGAs of Rivers state, asking people what they feel about government, the gaps they see in service delivery and what they would like done differently. The results and my team's idea of effective solutions is the framework from which a roadmap for the renewal of Rivers state has emerged. The first of its kind by a civilian.

I have thought long and hard about politics and the possibility of running for the position of Governor in Rivers state. As it stood, here were my options.

Run for Governor under the platform of PDP,
Run for another position,
Be a by-stander in the party or
Retire completely from politics.
Let me confess very quickly that since my ambition is primarily to deliver our President, working for a party that will not promote that agenda is not really an option. Even if by some miracle of omission, APC offered me the ticket on a platter of gold, I would not take it. In addition, being an "observer" in this climate reminds me of the phrase that a spectator is either a coward or ignorant. I'd like to think that I am neither. That leaves me only two options - running for Governor or retiring from politics and facing my businesses.

I have thought long and hard over these two options. Even though I have worked for the men and women of the state and beyond in my own little way, the inability to satisfy a huge number of them, even when my own prosperity is put at risk has left me feeling that I'm best facing me and my family's troubles, attending to my aged father, my disabled son, my beautiful wife and my other lovely children. If I don't take care of me and mine, will anybody else bother? That is why the decision to quit politics is attractive, that is why I'm tempted to hang up my boots, leave the field of play and take a back seat to help support and usher in a new style of leadership.

But where is this new style of leadership? We have looked long and hard at the contenders for the office. Who will lay the foundations of a new Dubai in the Niger Delta, who will bring peace where there has been war and has a track record to prove it, who will create thousands and thousands of jobs, close ranks across party and community lines, build bridges across ethnic divides and give Rivers people a reason to smile again? Who will emphasise the importance of a new transport system, investment in low cost and medium cost housing, bring the much needed development to the rural areas and make time for a truly decentralised Rivers state? Who will confront corruption without fear or favour? Who has touched so many without ever holding a political office yet has built businesses from nothing. The answer in my heart and the answer in my head is Team Prince Will. That is why I have thought long and hard and I have now decided to, in spite of the challenges ahead, tell you today that I will run for the esteemed office of the Governor of Rivers state under the platform of the PDP.

In the days and the weeks ahead, I will be collecting my nomination forms, unveiling my roadmap for the renewal of Rivers state and introducing my campaign team to the world at our new state of the art offices here in PH on Aba Rd. I hope that all of you who hear this message will feel my passion and know my love for what will soon be one of the greatest states here in Nigeria. Those who know me, know that as it took me this long to emerge, there will be no turning back. Have no fear. This train has only one stop and that stop is Brick House in 2015. I have always maintained that it would be Governor or nothing. Now it is clear that nothing is not an option.

Our doors will be open to all. We need volunteers, newcomers to the political scene and seasoned politicians who believe in the people and Rivers state. If you live in PH, we can be reached via the phone (text only) on 0807 700 7007, via the web on www.tonyeprincewill.com, via bb on 79A5A1EC, via Twitter on @tonyeprincewill, via email with [email protected] or via Facebook at Prince Tonye Princewill. This is the winning team and even if you don't come from Rivers state or live in Rivers state, you can help us achieve what I believe will be a collective victory. Every little helps. Register online at our website and choose a category to volunteer in.

We need so much help. I have not accumulated the wealth others have, I have no state or federal appointment, been working with the people non stop even when there were no elections and I don't have a God father other than God the father. I may be younger than most, but my team and I guarantee you that winning will send a message that good men can win too. Today it is me but thanks to my youth agenda, tomorrow it may be you or your children. Politics is too important to leave to politicians. Let's join hands together to make this work. You know we can.