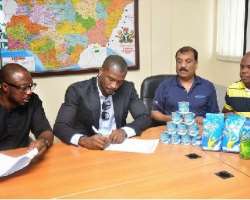 Remember Nollywoodgists.com reported some weeks back about the possibilities of Peter Okoye, one half of P-Square music group, becoming the new face of Olympic Milk. Well, the most kept secret has now been revealed.

We have learnt that makers of the product have decided to pick Peter as its brand ambassador, leaving Paul out of it. Peter Okoye recently put pen to paper to seal the contract with the company and would now use his influence to promote the milk product.

Until now, the P-Square brothers have been ambassadors of Skol drink, a deal they signed in Congo not too long ago. They are both Glo brand ambassadors. They are not too known to sign solo deals but we cannot confirm what convinced Peter to take this deal.

They have been travelling some countries promoting their 'Double Trouble' album.

Not too long ago, there were breakup speculations trailing the brothers, but things were quickly sorted out.