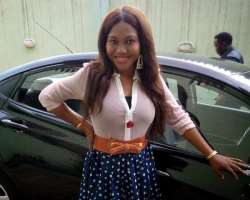 The Lagos State University Teaching Hospital (LASUTH) has finally concluded its autopsy on the cause of the untimely death of Taiwo Oshadipe who died on her way to the hospital on Friday, October 3, 2014. And cardiopulmonary failure was mentioned as her cause of death.

It has been learnt that the body of the 30 year-old mother of one will leave Lagos State University Teaching Hospital (LASUTH) mortuary in Ikeja, at around 8:30 am onwards to Victoria Court Vaults. Burial is fixed for 10am.

Friends and fans of the singer who was from Akungba Akoko in Ondo state are organizing a candle light procession today, October 14, 2014m at 5pm. The procession takes off at Lagos Television (on Lateef Jakande), through the Governor's Office in Alausa and lands at Murhi International Television, Alausa all in Ikeja, Lagos

MAY D MAY ENTER INTO TROUBLE WITH PSQAURE

HACKERS: BBA'S KAREN IGHO IN TROUBLE OVER HER BAD PICTURES