Taiwo Oshadipe To Be Buried Wednesday In Lagos 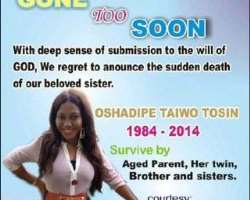 The burial arrangement for the late Nigerian music artiste, Taiwo Oshadipe of the popular Oshadipe Twins has been released.

According to manager of the singers, Mr Olumide Akinsanya, the remains of Taiwo would be laid to rest on Wednesday, October 15, 2014 in Lagos.

Mr Akinsanya disclosed that the body of late Taiwo would leave the Lagos State University Teaching Hospital (LASUTH), where the singer died some days ago, at 8:30am to the Victoria Court Cemetery (Now Vault), located on Lekki Epe Expressway, Lagos, where she would be buried.

The burial is expected to take place by 10am prompt.

A candlelight procession was held in honour of late Taiwo Oshadipe last week in their Abule Egba home in Lagos. She was aged 30 and survived by her aged parents, twin sister, brother and sisters.

Yoruba Actor, Golugo In Street Fight With Vigilante Boys In Ibadan --How Fathia Balogun Put Him Into Trouble

'Stay Away From Married Men'--Karen Igho Advises Nollywood Actresses, Others

Disadvantages Of Being Handsome