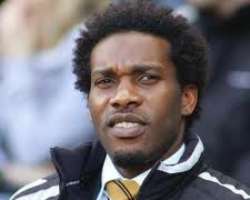 A former skipper of the Super Eagles, Austin Jay Jay Okocha, has expressed disappointment with the senior national team, over the 1-0 loss to Sudan in the African Cup of Nations Qualifiers in Khartoum on Saturday.

The two-time BBC African Footballer of the Year described the defeat as confirming his worst fears that 'football is long dead and gone' in Nigeria.

Writing on Twitter on Sunday, Okocha wondered if the Super Eagles could have performed better, considering the level of development of football in the country.

Stating that the result of the match has put the national team in a 'very unusual situation,' he cautioned against unfairly criticising the Super Eagles and the coaching crew.

'We are in a very unusual situation. The question is: 'do we deserve better considering the state of our football affairs in recent times?' Anyone that blames Keshi or the boys is short-sighted. Our football is long dead and gone. This is just the confirmation,' the former Nigerian midfielder tweeted.

The teammate of the Super Eagles Coach, Stephen Keshi, however, praised the South African national team for their 2-0 triumph over their host, Congo, adding that Nigeria should step up their game.

'Well done, South Africa. It is not the result most Nigerians expected, though. But we have to step up our game and grab the next six points to have a chance,' Okocha added.

Meanwhile, Nigerians have been divided over the Super Eagles' slim chances of qualifying for the 2015 African Cup of Nations following the Sudan defeat.

While some social commentators argued that Keshi should voluntarily throw in the towel or be sacked, others said he should not be unceremoniously removed.

Hashtags such as #keshiOut, demanding Keshi's sacking, have since gone viral online.

Football commentator for Optima Live, Deji Faremi, said he held the belief that 'Keshi's cup is full', adding that 'Keshi should leave.'

Faremi, however, noted that Keshi is not the 'devil' behind Nigeria's football woes, saying Nigerians should also begin to ask some pertinent questions about the running and development of football in the country.

'Yes, Keshi has lost his dressing room and is always quarrelling with his players. And he is really arrogant, too. I think Keshi should leave. I believe he should leave. I won't hold brief for Keshi; he should leave. But let's ask ourselves: How many tactically-strong coaches, including foreign ones, have Nigeria had in the last five to 10 years?

'When Keshi leaves, are we going to get a coach who is truly better, or are we going to continue with the same mediocrity? Do Nigeria really have top or world-class players at the moment compared to other African and non-African teams?

'Imagine dumping many of these players, does Nigeria have genuinely better replacements? Do we think it's not a problem that we do well in age-grade competitions, but the players 'decline' as they grow?

'Another important question is: Do Nigerian players (almost all) play as well for the national team as they do for the clubs? Is that double standards? Can Nigerians stop acting like he's the devil? I also think Nigerians should start realising Keshi is not 30 per cent of the problem of our football,' Faremi argued on Twitter.

Lamenting the performance of the Super Eagles, sports analyst with Super Sport, Colin Udoh, stated that the present crop of Super Eagles did not deserve to participate in the African Cup of Nations holding in Morocco.

In his analysis of the match, Udoh stated that the Super Eagles lost early chances, adding that the various passes in the midfield were 'pointless' with 'no real penetration.'

With the Super Eagles at the bottom of the table in Group A - with one point from three matches - Udoh tweeted, 'Funny that South Africa may have done Nigeria a favour by winning. But this team (Super Eagles) does not deserve to be in Morocco.'

A social commentator, Emeka Enyadike, wrote on Twitter that it was worrisome that Nigeria's 'best chances' at the qualifying match came from Mikel Obi, stating that the development showed that the Super Eagles 'really has a problem.'

Disagreeing with those calling for the head of Keshi, however, a respondent, Abubakar Isimbabi, explained that Keshi's sacking would not solve the Super Eagles' problem.

'The outcome of Sudan-Nigeria match is unfortunate but I think Keshi should be left to finish the qualifiers. What miracle is expected from a new coach?' Isimbabi tweeted. Punch