No Woman or Marriage Can Brake Bracket……..Vast 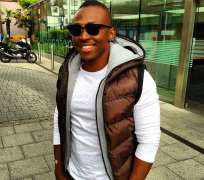 Nigerian singer, Vast of pop duo, Bracket, who was recently returned from a surgery in United Kingdom after being diagnose of Lymphoma (Cancer), has revealed that the group 'Bracket' cannot split for any reason.

According to him, being together as a group is the most important thing and even marriage cannot make the group breakup. Adding that he sees marriage as the peak of their career.

Vast stated that though they are doing good music now, but he sees it that they are just playing and when they get married, the responsibilities will be harder.

He stated that anyone, who thinks that women will cause a split up is getting it wrong because they know what women can do and they know the kind woman they wish to get married to.

The singer also noted that for the monetary issues and properties, they will sort themselves out like the way they always do.