Wizkid in Drinking Competition With 2Baba 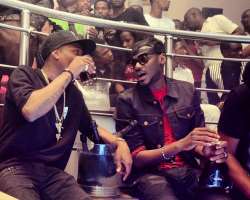 Apart from musical talents, Most Nigerian artistes are blessed and annointed with the talents of drinking which is the more reason even in live video shoot, they are always seen with red plastic cup filled with alcoholic drinks.

There is no musical video in Nigeria where drink is served that you will not see them with red cup of drink on display if not glass cup of hotels.

Recently, Nigeria's wave of the moment, Wizkid, attested to that fact by posting a picture of himself with 2Baba in a drinking competition with four bottles of Hennessy at a club.

Wizkid stated that whenever he hangs out with 2Baba, they love to have much drinks as they can.

The two artistes, have been seen together especially after been revealed as this year's Hennessy Artistry headliners.

They are widely known for monster hits and ground breaking videos will join a league of iconic talents who have headlined Hennessy Artistry in the past, like Dbanj, MI, Tiwa Savage, Banky W, Shina Peters among others