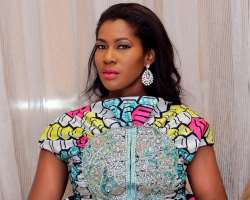 Deletable Nollywood actress, Stephanie Okereke Linus is currently working with The Queen of England on a youth empowerment initiative. The Imo State born actress was recently chosen as the official spokesperson for the 2014 Queen of England's “Queens Young Leaders Awards” campaign.

The dark and beautiful entertainer was specially chosen alongside revered South African Archbishop, Desmond Tutu for the global initiative.

Mrs. Linus disclosed that the Queen's Young Leaders Awards seeks to discover, celebrate and support young people from every corner of the commonwealth nations by helping to transform their own lives and the lives of others around them.

“Exceptional young men and women aged between 18 and 29 who are taking the lead in their communities and using their skills to transform lives are invited to apply for a Queen's Young Leaders Awards, in honour of Her Majesty The Queen,” she stated. “This will support winners to develop the amazing work they are already doing in their communities,” she said.

The actress is responsible for creating awareness in Nigeria for the initiative and equally hopes that Nigerian young people will apply in droves to win the awards.