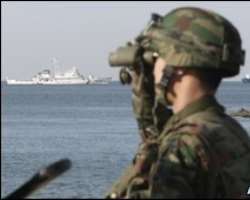 The force of Friday's mysterious explosion which sunk a South Korean naval ship appears to have split the vessel's hull in two, officials say.

The two halves are lying on the sea bed but bad weather has prevented military divers from reaching the wreckage.

Forty-six sailors are missing and rescue workers say it is unlikely that anyone could have survived three days in the near-freezing water.

The cause of the explosion on the 1,200-tonne Cheonan remains unclear.

The BBC's John Sudworth in Seoul says several possibilities have been suggested:

an accidental onboard explosion
a blast caused by hitting rocks or sea mines
or a deliberate outside attack.
The naval patrol vessel sank near the disputed maritime border with North Korea but military officials say there is no indication the North was involved.

Fifty-eight sailors, including the captain, were rescued from one of the South's worst sea disasters.

Some rescue-workers say it is still possible that some people could have survived in air-pockets inside the ship, although the water in the Yellow Sea is about 4C.

After visiting the disaster site, Defence Minister Kim Tae-young said: “The vessel appeared to have been split into half,” reports South Korea's Yonhap news agency.

Although the waters are fairly shallow, the exact location of the wreckage has not yet been located, according to defence ministry spokesman Won Tae-jae.

A group of 80 family members have sailed around the crash site and watched the rescue efforts, the AP news agency reports.

But some relatives are accusing the navy of a cover-up, saying the ship was in need of repair.

'Save me'
Earlier, the ship's rescued captain has been recounting what happened.

“There was the sound of an explosion and the ship keeled to the right. We lost power and telecommunications,” Yonhap quoted Choi Won-il as saying.

“I was trapped in the cabin for five minutes before my colleagues broke the window in and let me out. When I got out, the stern had disappeared.”

A number of the crew jumped into the water, Yonhap said.

“Yells and screams filled the air,” witness Kim Jin-ho, a seaman who was on a local passenger ship bound for Baeknyeong, told cable news channel YTN.

“Marines on deck were desperately shouting: 'Save me!”'

South Korean President Lee Myung-bak convened an emergency meeting of security officials and said all possible causes for the sinking would be investigated.

He ordered the military to focus on rescuing the sailors.

There were initial reports that another South Korean ship had fired shots toward an unidentified vessel, but officials later speculated the target had been a flock of birds.

The incident comes at a time of tension between the two Koreas. International talks aimed at ending the communist North's nuclear ambitions have been stalled for months.

North and South Korea are still in a official state of war because the 1950-53 Korean War ended only in a truce.

Since then, they have fought three bloody skirmishes in the Yellow Sea.

In January, North Korea fired about 30 artillery shells not far from Baeknyeong. South Korea fired 100 warning shots in response, but no injuries were reported.

South Korea recognises the Northern Limit Line, drawn unilaterally by the US-led United Nations Command to demarcate the sea border at the end of the Korean War. The line has never been accepted by North Korea.