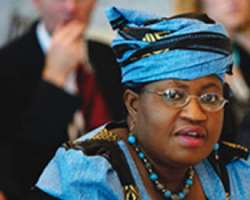 Audit report on $10.8bn allegedly missing from the coffers of the Nigerian National Petroleum Corporation will be ready in November, Minister of Finance, Dr. Ngozi Okonjo-Iweala, has said.

Okonjo-Iweala, who is also the Coordinating Minister for the Economy spoke at the Financial Times Africa Summit 2014 in London on Monday.

She said there had been ongoing discussions between the Ministry of Finance and the Ministry of Petroleum Resources on the matter, adding that the huge attention generated by the unaccounted fund necessitated the government to take steps leading to the appointment of Price Water House Coopers to do a forensic audit.

The minister said, 'Initially it was $48bn, then $20bn; but the figure we have always had is $10.8bn. I am Minister of Finance; if money is missing I want it - to use it for good things for the country and that was why when we went to the Senate, we demanded for forensic audit. The president supported it and asked for it to be done.

'We engaged PwC with the Auditor General taking the lead. They asked for 16 weeks to complete the work; they have spent 11 or 12 weeks so far and they will be done in a couple of weeks.'

On Ebola, the minister said Nigeria needs to be commended for the efforts it made in ensuring the index case did not take the illness out of the country and also for containing it.

She said, 'Nigeria did a great service by stopping Patrick Sawyer who was Minnesota-bound. Ebola cannot be said to be the real elephant in the room as it has been hyped beyond proportion by the media.

'We all want democracy, but how do you get it? It involves money. You must discuss issues relating to campaign funds. People who sponsor campaigns believe they must get something from the government when elections are won. These are the real elephants in the room and we need to deal with it.'

Discussing on a panel on Focus Nigeria, Director General of the Securities and Exchange Commission, Arunma Oteh, described wholesale and retail trade as the future of the Nigerian economy.

Oteh said Nigeria was focusing more on Small and Medium Enterprises development as a way of creating more jobs and improving the standards of living of their citizens because it recognises that SMEs are vehicles for wealth creation.

She said, 'I think first and foremost is the recognition globally about the importance of SMEs because they are the ones who create jobs. I think there is a greater focus on how SMEs can be supported.

'In our own country, President Goodluck Jonathan recently set up an SME council. He set up a job board; all of that is focused on how we can practically address the challenges we are facing with SMEs.'

The SEC boss said to grow the SMEs the capital market was absolutely important to source funds.

She added, 'We need to provide funding at reasonable cost; capital that is patient so that people can grow their businesses and banking finance is not patient. What we need is capital that would be there for a long time; a market based finance that is long term and there is a global recognition of this fact.

'Housing is big and government is definitely focusing on it. This is because apart from providing housing for Nigerians to bridge the housing deficit; the sector is also capable of providing the much needed jobs to move the economy forward.'

Oteh said in the process of building houses, different workmen and manufacturers of building materials were needed and would be empowered.