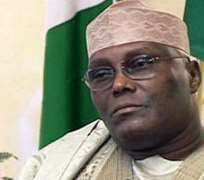 Former Vice-President Atiku Abubakar on Monday appealed to the Federal Government to take necessary steps to make governance at the centre less attractive to politicians.

Atiku stated this in Ado-Ekiti when he inaugurated the Oba Adeyemo Adejugbe General Hospital built by the outgoing Ekiti State government to mark its fourth year in office.

He suggested that the federal government could reduce the rush for power at the centre by devolving some of its powers which he described as too enormous.

He advised the federal government to limit itself with issues relating to defence and foreign affairs among a few other responsibilities.

He said other sectors including health, education and agriculture should be left for the state governments to manage.

Atiku advised that more resources and funds should also be ceded to the states to make them more functional.

'The Federal Government as it is constituted presently is too powerful; some of the responsibilities being supervised by it can be better handled by the states.

'For instance, what is the federal government's business in agriculture when it does not even own any piece of land of its own.

'Why is the federal government still involved in health matters when most of the health responsibilities are undertaken by the states,'' he said.

Atiku said if the federal government would be courageous to hands-off some the powers currently under its control, it would be less attractive to politicians.

The former Vice President commended the foresight of Gov. Kayode Fayemi in building the hospital, saying it showed his concern for the welfare of Ekiti people.

Earlier in an address of welcome, Fayemi said his administration decided to build the hospital to fulfill his electioneering campaign promises.