US to citizens: Nigeria contained Ebola; We can 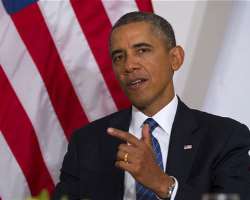 AT a time reference to Nigeria in global news and international affairs has been mostly about the unending killings by terrorists in the Northeast, the Ebola management seems to be shining some positive light on Nigeria and its medical personnel, some of whom paid the supreme sacrifice to ensure that Ebola was controlled.

This is coming just as the Nigerian Ambassador in the US, Prof Ade Adefuye, assured Nigerian travelers to America that they would not be subjected to any form of medical screening on arrival at US airports.

Speaking late Friday afternoon at the White House at a hurriedly convened press briefing on the first Ebola case diagnosed in the US, top White House officials and US government health officials were pressed by journalists who pointed out to the failure of the Texas Presbyterian Hospital in Dallas, where the Liberian patient went, but was not immediately diagnosed even though he had told the medical team in the hospital of his symptoms and that he had just returned from Liberia.

A White House reporter asked at the press briefing 'Is nobody concerned that there were these breakdowns in Dallas?  And are you really confident that there's not going to be similar breakdowns elsewhere along the same line?

Responding the US Human Health Services Secretary Sylvia Burwell was the first to bring up the way Ebola was contained in Nigeria to reassure Americans at a press briefing beamed live all across the US and globally.

Said she ' we're confident these processes will work.  If you look at what happened in Nigeria in terms of the cases in Nigeria, what happened is we quickly activated — and CDC was a part of supporting the country of Nigeria both at the state and federal level to be put in place the things that it needed to put in place. We know it's about detect, isolate, treat the patient, and do the contact tracing.  Those are the steps.  And now we see where we are with Nigeria in terms of the cases and them having moved through.'

Adefuye who issued his statement on the same day the US government officials addressed the press briefing also noted that 'the U.S. government, especially the Department of Health, is very much impressed with the success achieved by the Federal, Lagos and Rivers State Governments in combating Ebola. The announcement by Nigeria that it will assist other African countries to combat Ebola has been well received by the U.S. government and public.' Agency report