People Get Divorced As Much As They Get Married----Ik Osakioduwa 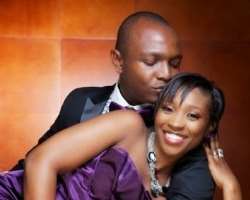 Though, marriage breakups is becoming rampant in the Nigerian entertainment industry and among the big names in the society, but thumps up should still be given to those few that have been able to manage their home over a period of time.

We can clearly point fingers at veteran comedian Ali Baba who sometime in the year, celebrated his marriage anniversary, followed by Julius Agwu, Okey Bakasi, Sound Sultan celebrate 5years wedding anniversary with wife and few others that have not even made theirs known.

A typical marriage example to learn from is Nollywood's love birds, Joke Silva with Olu Jacobs. They have been married for years and lovely children and yet, the actress, still remains the apple of Jacob's eye. How I just wish our Nigerian celebrities could just to take a clue from all these people and try to get their priorities right. It is being said that marriage is another institution of its own and I am beginning to see that and I think a lot needs to be learnt before saying I do to that man or woman you are yet to know.

Another celebrity that has brought in another smile into the industry is TV and Radio host Ik Osakioduwa, who recently celebrated his 6th year marriage anniversary.

Hmm, how time flies, just as if they got married yesterday. He took time out to make a beautiful shout out to his wife whom he said cannot be traded for anything in the world.

You will agree with me that these days where people get divorced as much as they get married with irreconcilable differences, a marriage of 6 years is worth celebrating.

I Was Ordained By God Not Righteous Man.......Prophet Soul E