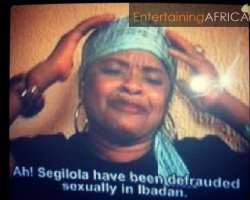 Nollywood has come to stay and waxing stronger as the day goes by to the extent that other countries want to associate with the industry which has contributed immensely to the growth of the Nigerian economy.

In analyzing how the growth of the make-belief industry has been rapid in terms of growth, many would say thanks to the English aspect of Nollywood, while some will say the Yorubas and others would want to settle for the Kannywood, but whatever aspect it is, Nollywood is Nollywood.

Where Nollywoodgists.com will be pointing its torchlight at, is the Yoruba movies translation to the English language. You will agree with me that a non-Yoruba person who does not even understand the language, will find it saddening to decode what they are saying because the translation sometimes does not conform with what the actors are saying and sometimes it is not all what the actor is saying that is being translated. The few translation they manage to give is always spelt wrongly and could be misleading at times.

You will agree with me that in terms of good story line, we have to give it to the Yoruba movies. They are very good at telling the story the natural or native way. But is faced with the challenge of relaying it with good English translation which i feel could be better if adequate attention is given to it.