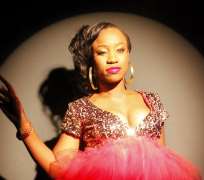 Sexy, Imo State-born singer, Adokiye Kyrian, once created a media storm when she disclosed that she is still 'untouched' s*xually.

The talented music act who calls herself 'pretty v**gin' said only the man who could buy her mum the private jet she promised her would get to unlock the secrets of her womanhood.

However, she just revealed that she now has a boyfriend, But then, according to her, the guy hasn't gone beyond ground floor of exploring her womanhood.

“I have a boyfriend now, But what we share is Agape love; no s*x kind of love. But I know I want to settle down and have kids. I heard, these days, things have changed; Menopause comes fast now! Young girls aren't young again after all, ” she began.

She also explained how her new boyfriend would cope having a relationship without s*x.

“Do you know s*x hinders blessings? Do you know s*x takes your hand very far from the reach of your blessings? I know you are married and have every right to s*x but try this sometimes. It always works like magic. It's faster than 100 million Babalawo's power. Anyway, maybe it is okay for those who have license to have it but for me, I won't have it until after marriage”, she said.

“I warned Keshi about errors in the second half” – Prophet T. B Joshua