AASU On The Menace Of The Ebola Virus 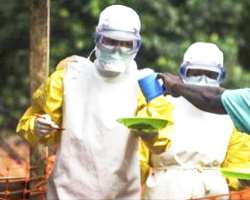 The deadly Ebola disease has killed, so far, over three thousand (3000) people and more than six thousand five (6500) others are infected according to World Health Organization (WHO). Estimates suggest that as many as 1.4 Million people may be infected by the end of January under worst-case-scenario circumstances.

The rapid mode of transmission of the Ebola virus, the lack of vaccine to cure it and the multiplication of its centers in the West African sub-region is alarming and a threat for the whole world. Aware of the danger of the disease, the United General Assembly has taken concrete action in order to curb this situation by establishing the UN Mission for Ebola Emergency Response (UNMEER) that is currently deploying in Accra, Ghana as well as in the three most impact countries.

The unfortunate laid-back attitude of African leaders to such a dangerous disease menacing the future of human beings is frightening. Indeed at national, sub-regional and continental levels the response has been so soft as if we are dealing with a benign tumour. Without the concern and mobilization of the International Community we may be witnessing the wiping out of Africans and others by this disease.

Our attitude, as Africans, of waiting others to come to our aid always is mind-baffling. We behave like we are unable to think and act in the face of problems affecting us. But Africa is abounded in human and natural resources sufficiently enough to enable us to form multi-stakeholder partnerships and alliances in order to combat effectively and eradicate the Ebola virus in the West African sub-region.

The time is now for African leaders to reaffirm their commitments to, effectively, pool together their resources, experiences and expertise in order to implement better coordinated and more effective action against this disease.

African governments must learn, in the interests of their people, to collaborate more effectively among themselves on one hand and with their citizenry on the other to overcome such unfortunate occurrence. AASU invites the African Union (AU) and ECOWAS to, effectively, play their role of interface between the various spheres of their member States, civil society to create the necessary forums promoting partnerships at all levels in the fight against this life threatening Ebola disease.

In this endeavour the All Africa Students Union (AASU) commits itself to be part of any initiative by the AU and ECOWAS geared towards involving all the forces to fight this disease through its respective means of action by:

-Providing feedback on the programmes and activities implemented and acting as a bridge, wherever possible, between citizens and the authorities etc.