I Was Speechless When Gbenro Proposed to Me……..Actress, Osas Ighodaro 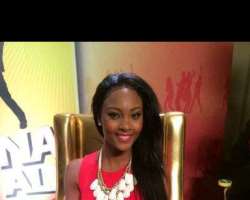 Newly engaged actress, Osas Ighodaro, took to her Twitter account recently to answer varieties of questions from friends and the media and also, spoke on her engagement to Gbenro Ajibade and urged her fans to stay tuned as there is every possibility of returning to Tinsel set with her fiancé.

Speaking about her man, Gbenro, after she was asked who apologizes first when they have misunderstanding, the actress revealed that it is actually equal, describing him as determined, sassy and sweet.

She disclosed that she was speechless when Gbenro asked her hand in marriage as she could not explain how she felt but declined disclosing when the wedding bells will sound.

Osas who is currently the host of reality TV show 'MultinaDanceAll,' stated that she sometimes feel nervous while on stage but always overcome it with the support of the fans.

She added that she prays a lot when she is confused because there are times she gets confused on what to do.