Time To Stop The Tragedy Of Building Collapse 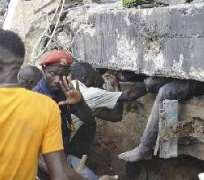 It was a tragedy of building collapse one too many on that balmy Friday, September 12, in the premises of the Synagogue Church, Ikotun, Lagos when the foundations of the Synagogue Church of All Nations (SCOAN) Guest House could no longer hold as it came down crashing like a pack of cards. 80 people lost their lives, 131 people survived albeit with varying degree of injuries, and miraculously, a 45-year-old woman walked out of the rubble alive after 4 days of the building failure.

Some persons thought to be South African nationals are still declared missing. The total number of people present at the building before the structural failure was about 200, including foreign believers, local church members and canteen workers. It is a tragedy of monumental proportion when worshippers who had come to seek the face of God end up seeing the face of death. For Founder and General Overseer, Prophet T.B Joshua and his teeming church members of SCOAN across the globe, this was one tragedy that they didn't foresee or foretell.

The Synagogue guest house we learnt was originally designed from the foundation to hold a three storey building, but it ended up a sprawling 6 storey edifice! This is almost twice the load the foundation, steel rods and concrete structure was designed to carry. It is appalling that the Synagogue building had no approved plan in a state like Lagos.

There is no evidence whatsoever that SCOAN secured regulatory approval for professional advice to increase the number of floors neither did they ask the appropriate questions, nor did the contractors adhere to strict standards, according to Lagos state Commissioner for Physical Planning and Urban Development. Safety of the members who thronged the Synagogue for spiritual solace was relegated to the background. This failure gives an ample opportunity for government at all levels, particularly in Lagos state, to put an end to structural failures leading to collapse of buildings.

The church authority must therefore be sued by the government for criminal negligence and flouting government's building regulations to serve as deterrent to others and the contractor charged to court.

Prophet T.B Joshua, labeled the collapse as a Boko Haram attack, claiming he was the target. That's the way to go in Nigeria after an avoidable tragedy. Cases have been recorded where Lagos state residents were forewarned by relevant authorities to evacuate buildings with tell-tale signs of structural failures and danger of imminent collapse but chose instead to cover such building with the 'blood of Jesus.'

Lagos in particular, has recorded several building collapses more than any other city in Nigeria. In 2006 alone, up to 3 major building collapses were recorded. On March 22, the top nine stories of a 21-storey Nigerian Industrial Development Bank building collapsed. July 18, a four-storey block of apartments composed of 36 flats, collapsed. In November, an uncompleted three-storey building under construction collapsed. In these three structural failures, at least 28 persons were killed while over 86 others were pulled out of the rubble alive but sustained varying degree of injuries.

The Synagogue building collapse has underscored the failure of relevant government agencies on one hand and greed on the part of contractors and building owners who use substandard materials for building or change building plans midway through construction - design for a residential(family) building can turn to a church overnight or the likelihood that bungalow, midway into construction, will turn to a storey building which often lead to structural deficiency like the case of Synagogue guest house. Unfortunately, there are still a number of buildings of similar circumstances dotting the skyline of many Nigerian cities.

The time has come for us to desist from passing the buck or putting the blame squarely on poor-quality cement, fake iron rods, greed of foremen to maximize profit and utter disregard for building and construction laws with intentional neglect for the safety of the occupants of such building to putting in place punitive measures to ensure engineers or architects who supervise the erection of such substandard buildings are made to face the full wrath of the law. It is time government does more than revocation of Certificate of Occupancy (C of O) of the land –which is a rarity nowadays – where such substandard buildings are erected.

Some remote factors of building collapse include; absence of soil test report, inability to carry out proper land survey, failure by foremen to understand and interpret building codes, lack of coordination between professional bodies like SON, COREN, CORBON, NIA, NSE etc and government and local town planning authority. Miserliness on the part of the owners (they shun professionals and use substandard materials to cut building costs), poor structural design, non-compliance with approved building design are some of the major reasons for building collapse in Nigeria.

We can stop looking for supernatural causes of structural failures and look within. They are human factors. If not for the lack of will to enforce the appropriate building regulations and the need to unnecessarily "manage" building cost, the probability of sudden collapse of building is relatively low even in the event ofan earthquake or hurricane, according to geographers.

Every building contractor should be duly registered for easy tracking and punishment should there be a reoccurrence. It is as tragic as the structural failure in itself that the issues of building collapses in Nigeria are hardly ever taken seriously by the government or the relevant law enforcement agents.

Contrary to what many think, building collapses are not natural disasters except in cases of earthquake, hurricane or tornadoes. The incidents in Nigeria are man made and therefore avoidable.

Disclaimer: "The views/contents expressed in this article are the sole responsibility of Theophilus Ilevbare and do not necessarily reflect those of The Nigerian Voice. The Nigerian Voice will not be responsible or liable for any inaccurate or incorrect statements contained in this article."
Articles by Theophilus Ilevbare
4-10-2014  X-raying The Motives Of Overnight Artiste-politicians2-10-2014  X-raying The Motives Of Overnight Artiste-politicians By14-9-2014  Boko Haram Sponsors: Beyond Stephen Davis’ Revelation8-9-2014  Ikimi, Ribadu And Politics Of Defection16-8-2014  Hypocrisy Of America’s Experimental Ebola DrugMore...