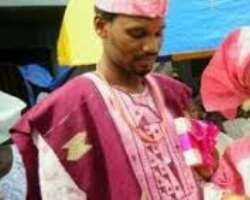 Nigerian music video director, Matthew Abiodun Aina aka Matt Max, is not just getting hot lashing from fans, but serious challenge from family members for dragging its name in the mud.

The music video director recently held a secret wedding to a legally married woman, Eniola Efunkoya who is a make-up artist (AweleBeauty) in August 30, 2014 and ever since, has been receiving wide condemnation.

Matt Max according to the family was in a relationship with a certain Martina Atsuelime whom he introduced to the family and have been going out with each other for about four years.

Eniola's actual husband, Demola Cole, in his reaction said: “I got married to Adeola Eniola Efunkoya in May, 2011. She left the marriage this year, May 2014, for another guy who is a music video director (Matthew Abiodun Aina) with trade name Matt Max. She left the marriage because of her secret affair with the so called Mattmax.

“On so many occasions, I called the so called Matt Max over his secret affair with my wife. She has not properly divorced me because she is still my legal wife and now she has gotten married to the guy out there. All I need her do is to answer to the divorce letter because I am already free from her bondage of four years.”