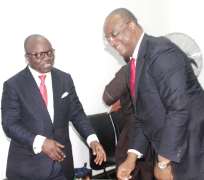 Governor Uduaghan receiving the President of the NBA,  Dr.  Austin Alegeh (SAN) during a courtesy call in Asaba on Thursday urged the bar association to assist in reducing frivolous petitions in the 2015 and  future elections in the country.

Dr. Uduaghan who had a total of 19 cases presided over by 77 judges/justices  instituted against him by his political opponents since May 29, 2007 when he assumed office, lamented the trend where some politicians rather than preparing for election only specialize in petitions aimed at distracting the winner and  wasting the time of the courts.

The Governor who disclosed that his administration had embarked on massive voter education towards the forthcoming local government and 2015 polls in the state, challenged the NBA to device means of discouraging its members from encouraging lawyers to be preparing briefs for candidates for elections to go for Tribunals rather than concentrate on winning in the elections.

“We should educate members of the Bar to reduce election petitions so that people will concentrate more on winning elections in the field,” the Governor advised, while assuring members of the NBA of government's continual support.

Governor Uduaghan told the visiting NBA President that his administration places high premium on the rule of law and has always complied with judgement of courts, noting, “We are very passionate about obeying court orders. We want to assure you that we will continue to obey court orders.”

The Delta State Government, Dr. Uduaghan stressed, the believed in law and order as bedrock for sustainable development, adding that the State Executive Council Meeting of Thursday proscribed 49 secret cults it identified as inimical to the growth of the society.

“We desire a society where law and order prevails. As a state government, we have approved the proscription of 49 cult groups,” the Governor said, lamenting, “it is so bad that we now have secret cults not just in the higher institutions but in secondary and primary schools and in communities.”

Dr. Uduaghan informed the President of the NBA that his administration has held the judicial arm of government in high regard and in demonstration of that signed the Judiciary Financial Autonomy Bill into law on Wednesday, thereby promoting and guaranteeing its independence.

Dr. Alegeh (SAN) had told the Governor and members of his delegation that they were in the state to thank him for his support for the NBA, commending him for donating vehicles to all the branches of the association in the state.

He pleaded with the government to uphold the rule of law by obeying orders of courts and guarantee the independence of the judiciary, assuring the governor of the preparedness of the NBA to embark on aggressive voters education towards the 2015 polls in the country.