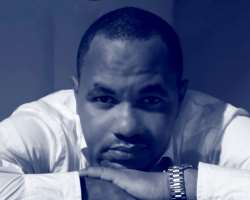 Report just reaching us has it that well known artiste, Slam, whose real name is Udoka Oguamanam, has returned to the music industry after a long hiatus.

The gorgeous singer has been underground for a long time now, and information whispered to Nollywoodgists.com has it that the brilliant artiste went for studies in the United Kingdom for his Masters degree in Marketing.

Information now available to us reveals that Slam is now out with a new single entitled 'Sweeter',

Regarding his shock return to the music industry, Slam, who came into limelight with the critically acclaimed single 'Ibu Chineke', released on the Kennis Music label, explained that, “I want everybody to always be true to that special someone because when all else goes you will realize that that person is sweeter than anything you ever had.

“This is a major hit among other hit songs that I will be releasing soon. I am also looking to have a couple of great collaborations as well.”

Speaking on his long break from the industry, Slam said, “After my studies in the UK, I decided to develop other aspects of myself, though I was still involved in a lot of music projects behind the scenes. For instance, I produced sound tracks for top Nollywood movies such as I'll Take My Chances by Emem Isong; Holding Hope which featured Uche Jumbo; Kiss and Tell by Monalisa Chinda; Okon In Lagos by Uduak Isong Oguamanam and many more.”

'Sweeter' is a masterful blend of high energy, rich lyrics and top quality production. It is based on a true life experience.

Wives Of Nigerian Comedians; Who Is The Cutest? [Pictures]

Sophia Chikere On Shopping Spree In US (Pictures)