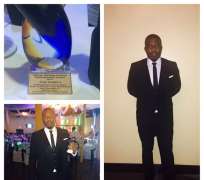 Over the weekend, some celebrities had reasons to smile, which made them to end the month of August on high notes.

While some Nigerians and other African entertainers were busy celebrating, Ghanaian actor, John Dumelo, also celebrated as he got an award at the African Heritage Awards Festival Entertainment held in Nashville TN, USA, in recognition for his service to humanity through his John Dumelo Foundation.

"Another great award! African Heritage Award for promoting Africa and also for touching lives through the John Dumelo Foundation,” the actor posted.

John had his primary education at Christ the King International School in Accra, Ghana, where he was selected by GAMA Film Company to play the role as a pupil in the movie 'Baby Thief'. He had his secondary education at Achimota School and further studied at the Kwame Nkrumah University of Science and Technology where he read Civil Engineering.

He featured in the television series, 'Sun City' and 'About To Wed', where he started to become a household name in the film industry.