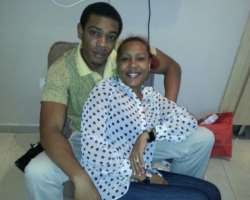 Recently, there has been a serious war between Shan George and the London-based music promotion outfit of his son, Jaga, Babylynn Promotions, over the release of Jaga's new single, Edo Boy.

The face-off between Shan, a top Nollywood actress, and Babylynn Promotions, seems to be annoying the young man, who is surprised that his mother and his promotion company are fighting over his song.

He expressed this in a chat with Tribune.

In his words, as published by the newspaper, Jaga said, “I am doing good music, the two ladies, my mom and promoter should be dancing instead of fighting.”

The genesis of the fight started when Shan accused of releasing the new single without informing her as the boy's manager.

Shan has in the past delved into music but she never made it big like she did with acting.