You Cannot Return Me To My Parents- Tiwa Savage Tells Husband 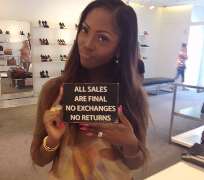 With the whole break up saga that goes around celebrity marriages these days, singer, Tiwa Savage-Balogun has intended to stay married no matter what.

The singer took to her social media platform to tell her husband that he can not return her to her parents. She took up a board in which was written;

“All sales are final, no exchanges, no returns” after which she captioned it “Which means you Mr Billz cannot return me to my parents or exchange me” she wrote.

Tiwa Savage tied the knot with her husband and manager traditionally in November, 2013 and they had their church wedding in Dubai in April, 2014.