I Can Sleep With Producers For Movie Roles—Nollywood Actress, Tessy Oragwa 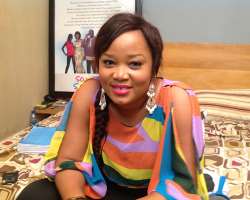 Nolywood actress, Tessy Oragwa, has lend her voice on the issue of affairs before roles in Nollywood between producers and actresses stating that it is a personal decision and is not open to criticism.

According to her, the issues of affair is in all sector but more pronounced in the entertainment industry because celebrities are in the eyes of many.

Tessy pointed that as far as a woman is concerned, she will always be approached by guys and it will be left for her to make a choice of what to do since she has the mind of her own.

“There is no discrimination about that, but don't make it look like you are being harassed or forced to do what you do not want to do. You have a mind of your own and you are mature enough to take decisions,” she adviced.

Speaking on her experience, the actress denied ever having such experience but admitted that if she is being approached and the guy is good, she does not mind making her decision to have her fun. “No, I don't think anybody would want to do such a thing to me. When you approach me and you are good, I might decide to take a decision and have my fun.”