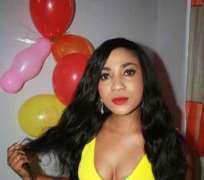 It was whispered to us by an informant, who is very close to the beautiful movie star, that Tola left for South Africa some months ago. According to what was disclosed to us by our informant, this is the reason she has not been active in the Yoruba movie circle, where she has a lot of fan base.

“Tola has relocated to South Africa since February. She is no more in Nigeria. She only comes in to spend few days and leave,” the informant told Nollywoodgists.com.

“She even celebrated her birthday in South Africa in July, it was a big one. Many people were there, i can even send you photographs,” the source said further.

When pressed to disclose why the actress relocated from Nigeria to South Africa, we were told that Tola now runs her business in the former apartheid country, which is doing well over there.