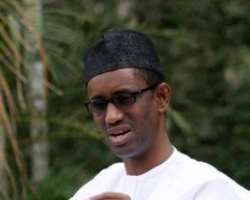 The EFFC ex-chairman, who spoke through his spokesman, Mr. Abdulaziz Abdulaziz, while fielding questions from one of our correspondents in Abuja said, “In Nigeria, especially in politics, you can't say that this is an exclusive party for the people who are thieves or this is for good people. It's just like saying that all Yorubas are this or all Igbos are this. In every group of people, there must be good people and there are bad people. Of course, the good may be more than the bad or the bad may be more than the good in any group. But there is no any party that is exclusively for the good people or for the bad people.”

He said that his defection was not borne out of his desperation to realise his political ambition but was based on his patriotic zeal to serve the country and its people. Abdulaziz said, “It is not true that he (Ribadu) was desperate to realise his political ambition. This is because this decision was taken in the overriding interest of serving the people. What matters for him is service. That is why even when he was a member of the opposition party, when government asked him to serve the country, he accepted the offer and he did a wonderful job that everybody hailed except those who don't want change in the system.”

“If you are ready to serve the people, sometimes you will have to do something that is not even palatable to yourself.” But one of Ribadu's close political associates in Yola told one of our correspondents that Ribadu's defection had more to do with his governorship ambition and the alleged failure of the APC to give him the expected support and compensate him for his “sacrifices” for the party. The source said part of Ribadu's sacrifices, which he said the APC had failed to reciprocate, was his offer to step down for the then presidential candidate of the Congress for Progressive Change, Gen. Muhammadu Buhari in the 2011 election and also his role in “wooing some governors to join the APC”.

The source linked Ribadu's defection to his unresolved grievances against the APC, which the source made the ex-presidential candidate to succumb to pressure mounted on him by people, including the Chairman of the PDP, Adamu Mu'azu; Minister of Finance, Ngozi Okonjo-Iweala, and a Principal Secretary in the Presidency, Hassan Tukur, to join the PDP.