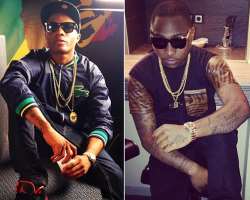 Current hottest music artiste in Africa, David 'Davido' Adeleke, has finally opened up on his social media war with his colleague and perceived archrival, Wizkid.

The social media was busy some days ago with the rumoured beef between these two young artistes, who are currently dictating happenings in the entertainment industry in the continent.

Speaking with Sahara TV, the 'Omo Baba Olowo' crooner disclosed that he felt pissed off when Wizkid threw jabs at him following a concert outside the country and stated that it was wrong for Wizkid to attack him the way he did.

In the words of the son of Nigerian billionaire businessman, “to me everything you do, you don't hit your brother down,” while stating that the issue started from a concert in New York, USA.

“I was even going to tweet like you know 'make sure everybody turn up for my brother Wizkid's concert' and he threw a shade like that. I'm not going to take that...that's why I went and said what I said,” Davido explained.

“Shout out to him. I'm still a big fan. It was nothing but don't throw a shade at me, especially when we were on the flight earlier. By the way, check the numbers on my last concert. Let's leave it like that,” Davido said.

Their is No Business Side To Nollywood Any Longer, we Live on Past Glory....Ramson Noah

Entertainment: Death In The Family As COSON Loses Its Staff

Photo: Is This Toke Makinwa's Feet Or…?