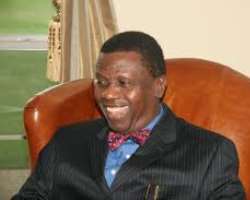 The General Overseer of the Redeemed Christian Church of God, RCCG, Pastor Enoch Adeboye, has announced sweeping changes in the top hirerachy of the church.

The revered leader of the fastest growing Pentecostal church in the world announced the changes after a meeting of the Governing Council of the church on Monday.

Adeboye, in statement by the head of Media and Public Relations, Pastor Segun Adegbiji, announced the retirement of two members of the council after attaining the retirement age as stipulated by the constitution.

A statement by the head of Media and Public Relations, Pastor Segun Adegbiji, said the two officers retired include Pastor Oluwalogbon and Pastor C.O. Osho and two members of the church who have served the church meritoriously have been appointed to replace them. They are Pastor Johnson Funso Odesola who had served the church for 40 years and Pastor Remi Akintunde following 38 years of meritorious service.

According to the statement, the Governing Council, the highest organ of the church is made up of 18 members with Pastor Adeboye as chairman. Other members now include Pastors Kuo, Ezekiel Odeyemu, Elijah Daramola, Gbadebo Lawal, Joseph Obayemi, Johnson Odesola and Remi Obayemi.

Adeboye also announced the constitution of a World Advisory Council which is expected to meet every December to give proposal for the consideration of the Governing Council. Members include all former members of the governing council and all special assistants to the G.O. The foreign outposts have been restructured as follows: Europe which has been divided into three smaller regions with headquarters in Holland, Spain and Sweden.

Similarly, Asia/Middle East has been divided into Malaysia and United Arab Emirate. This came just as the church announced tremendous growth in Nigeria within the last two years as the church planted 28,582 parishes in the year 2012-2013 and 32,036 parishes in 2013-2014.

About 8,622 deacons and deaconesses were ordained on Monday at the Arena of the Redemption Camp.